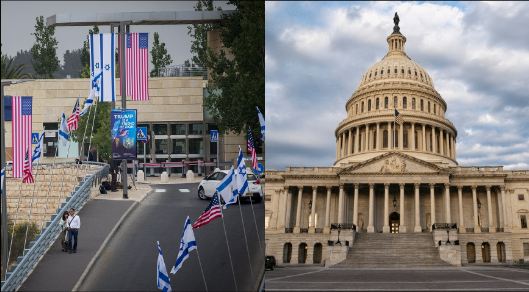 Biden’s anti-Israel measures have failed to ruin the historical US-Israel ties and now even Democrats may not be ready to back the US President’s catastrophic policy. In a fresh setback to the Biden administration, the US Senate has voted almost unanimously to keep the United States Embassy in Jerusalem. This move expressly confirms Trump’s 2017 move of recognising Jerusalem as Israel’s capital and relocating the US Embassy in the Jewish country from Tel Aviv to the holy city.

The Senate voted 97 to 3 while approving an amendment that makes the relocation of US Embassy to Jerusalem permanent. Only the usual suspects- Bernie Sanders, Elizabeth Warren and Tom Carper voted against making the American diplomatic mission in Jerusalem permanent. The Senate approval comes as a huge relief for the Jewish nation which was somewhat apprehensive about the fate of the US Embassy in Jerusalem with Biden’s accession to power in the US.

By approving Trump’s policy of relocating the US Embassy to Jerusalem, the Senate has managed to lend a sense of continuity to US-Israel tensions as against the disruptive character of the Biden administration. The move to relocate the US Embassy was not merely symbolic. While Israelis perceived it as an unwavering commitment of US bonhomie, Palestinians had interpreted it as a proof that the US would abandon their cause.

However, with Biden at the helm of affairs, the US-Israel ties suddenly went into a tailspin. Biden has done everything within his power to hurt Israel. He is yet to call Israel’s Prime Minister Benjamin Netanyahu in an apparent attempt to isolate the Jewish nation, and then Biden is continuously trying to strengthen Israel’s biggest enemies- Palestine and Iran.

Yet, US allies have shown a desire to continue with Trump’s Israel policy, while undermining the effect of Biden’s disruptive Presidency. And now, the US President is facing some sort of pushback on the Israel policy front within the US too.

The Senate vote on the issue of making the Jerusalem Embassy permanent is actually a signal to Biden. The fact remains that Joe Biden has a political agenda behind his Israel policy, as he feels that supporting Iran or Palestine does help him at a purely electoral level. But not every Senator can afford to upset Israel or Jews like Biden.

Perhaps, leaders like Bernie Sanders can afford to support anti-Israel moves given his tendency to support Islamism but others simply have no appetite for making the Jewish constituency unhappy. This is why Democrat Senators too have voted overwhelmingly in favour of Trump’s 2017 decision to recognise Jerusalem as the true Israel capital. The message is loud and clear- the Senate agrees with Trump’s Israel policy and expressly rejects Biden’s Israel animosity.