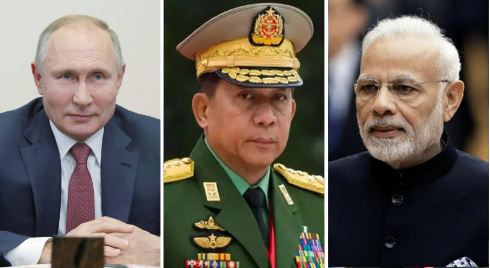 The fact that Russia does not have a geostrategic interest and India is a very considerate neighbour, makes them reliable partners for the Burmese military in fighting off Chinese influence from the country. Although for a very long time China has been the largest arms supplier to Myanmar, it has also been the largest weapons supplier to the separatist groups and insurgents which are working against the country. Thus, Myanmar seems to be utilizing its relations with Russia and India to ward off Chinese influence and move out of its dependence on Chinese exports.

The Myanmar Army has worked closely with India and the most overt proof of the same was India recently gifting a submarine to the Burmese military. Thus, as things are transpiring, the Indian hand will get more powerful going forward, with China losing out in the process. On the other hand, Russia is becoming a large weapon exporter to the Myanmar Army and is fast replacing the position of China. The Russians have only one interest and that is commercial. However, when the Burmese military imports from China, it leads to Myanmar becoming susceptible to the actions, activities and interests of its larger neighbour China.

Diplomats and analysts who have worked till recently in Myanmar show little surprise at the Russian stamp on the Southeast Asian nation’s third military coup. As they told Nikkei Asia that Senior Gen. Min Aung Hlaing, the army commander and junta chief, has cultivated defense ties with Moscow over the past decade to avoid dependence on China, Myanmar’s giant neighbour and largest weapons supplier.

The Moscow link has been highlighted in the days surrounding the coup. Russia showed it’s support to insulate the Myanmar junta from international rebuke and blocked a condemnation of the coup by the U.N. Security Council. Interestingly, Russian Defense Minister Gen. Sergei Shoigu had visited Myanmar to finalize a deal for a fresh supply of weapons: the Pantsir-S1 surface-to-air missile system, Orlan-10E surveillance drones and radar equipment, just recently. “Just like a loyal friend, Russia has always supported Myanmar in difficult moments, especially in the last four years,” Russian media quoted Min Aung Hlaing as saying during the minister’s visit.

The Burmese Army has been ever critical of the Chinese Communist Party and its intentions vis a vis relation with Myanmar. Last year, the Myanmar Army spokesperson alleged that “one foreign country” was providing sophisticated arms and financial support to Myanmar-based insurgent groups. Brig Gen Zaw Min Tun, the spokesperson for Tatmadaw (Myanmar military) said that Arakan Army, Ta’ang National Liberation Army, the Kachin Independence Army the Shan State Army-North, and United Wa State Army (UWSA) – all of whom are ethnic rebel armies based in the country’s northern province and share a border with China’s Yunnan province – are being supported by Chinese businessmen and the Chinese Communist Party.

While on the other hand the interaction and engagement of Myanmar with India and Russia is increasing. Myanmar has been cooperating with India in joint operations to destroy the terror camps operated by the Arakan Army on the Indo-Myanmar border who pose a possible threat to the ambitious Multi-Modal Transit Transport Project. India and Myanmar share a good deal of security cooperation and the Armies of the two countries have also worked together in striking the NSCN-K (National Socialist Council of Nagaland-Khaplang) camps within Myanmar. And the Burmese army has increased its military weapon imports from Russia, thus, trying to decrease its dependence on the Chinese military exports.

Read more: Coup is ‘cabinet reshuffle’ and UN condemnation is garbage – How China is going all out to stop the Myanmar army to act against China

The military convoys captured on television cameras and the viral video, in the early hours of Myanmar’s latest coup reveal deepening ties between the country’s military and “loyal friend” Moscow. Many of the light armored vehicles on the streets were made in Russia. These imports are among a growing list of supplies that have deepened ties between Moscow’s defense establishment and Myanmar’s military. In addition to this, the partnership with India is also on a rise, be it the supply of vaccines or the gift of a submarine, India is also stepping up as a substitute to the belligerent China as a caring and reliable neighbour. Russia and India are fast turning into the Myanmar Army’s go to friends at a time when China seems interested to capitalize on the isolation that Myanmar is most likely to face.

How much of a role did Fauci play in the eviction of Donald Trump?