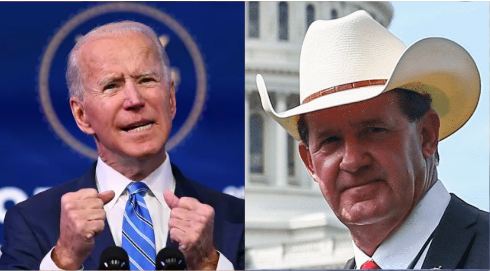 As Biden starts off with his agenda to flood the United States or America with illegal immigrants, the state of Texas has started bearing the brunt of such disastrous policies. Texas Sheriff A.J. Louderback has disclosed the state of misery that the state has slipped into. There are three main issues that are cropping up- illegal aliens, risk of major COVID outbreaks and increase in crime rates.

Louderback appeared on “Tucker Carlson Tonight” on Monday. The Texas Sheriff corroborated that reports of illegal aliens being released from custody into the United States and that too without being tested for COVID-19 are “absolutely true”.

Louderback told Carlson, “The memo that I received this last week — it’s a defunding-ICE-by-memo — by memorandum, sent out January 20, 2021.” And then the Texas Sheriff explained what it means. He said, “This is a particularly devastating document for Texans and Americans here in the United States.” Louderback added, “When I read it and looked at it, it’s a message to the world that you can come here illegally, you can commit crimes here against Americans, and remain illegally.”

The Texas Sheriff claimed that the memo was circulated by then-Acting Homeland Security Secretary David Pekoske. Louderback lamented, “We walked this path from 2008 to 2016,” and added that the program released by the latest memo bears semblance with the Priority Enforcement Program in 2014 and 2015, “where people were able to commit crimes against Americans.”

This time around, Biden seems so desperate for bringing in immigrants that he doesn’t even care for the COVID scare. Louderback added, “The COVID issue [is being] overlooked during that time. So, I struggle for a thought process, like many Americans and Texans, on how an administration can conduct themselves in this matter.”

Louderback opined that law enforcement is being completely restrained here. He accused the federal government of “promoting a lawless attitude”. The Texas Sheriff added, “Every peace officer in the United States should be extremely concerned about the attitude, the lawlessness, the complete abject removal of law.”

Meanwhile, Biden is ready with yet another shocker. He wants to allow 25,000 asylum-seekers in Mexico to enter the United States of America. Biden has basically reversed Trump’s “Remain in Mexico” policy or what was officially called Migrant Protection Protocols. This is Biden’s first step towards enforcing his catastrophic poll promise of conferring citizenship upon  11 million illegal immigrants.

Texas is however the worst hit here. The Republican state is already facing Biden’s imprudent curbs on oil and gas activity. Now, Texans are also staring at Biden’s attempts to bring in more and more immigrants which is also bound to create a COVID scare, apart from increasing crime rates.

Destiny is calling Microsoft to create parallel Facebooks and Twitters, and looks like Microsoft has already begun