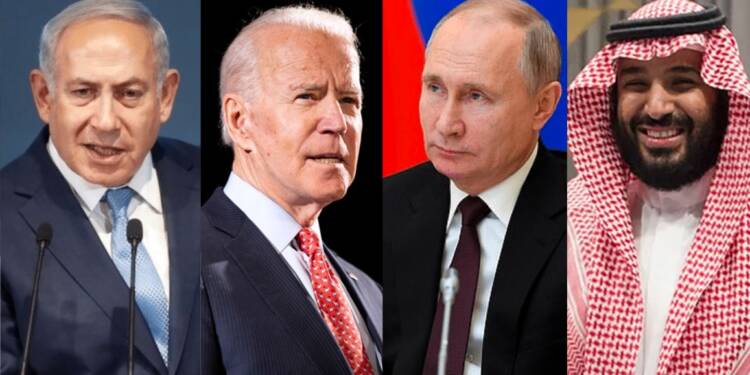 Good leaders do not miss opportunities when presented to them. Joe Biden is abandoning the USA’s long-standing Middle Eastern allies for the futile attempt to recreate the Obama era Iran Nuclear deal. Russian President Vladimir Putin has realised that this is a good opportunity to capitalise on the current developments and gain influence in the larger Middle East.

Russian Deputy Foreign Minister Sergei Ryabkov has called on Iran to “show restraint” after UN inspectors confirmed that the country has started producing small amounts of uranium metal in the latest breach of Tehran’s 2015 nuclear deal with world powers.

As per reports, International Atomic Energy Agency (IAEA) Director-General Rafael Grossi informed the member states on February 10 that the UN atomic watchdog’s inspectors had confirmed that 3.6 grams of uranium metal had been produced at a nuclear facility in Isfahan.

Joe Biden, in his leanings towards Iran, is abandoning USA’s long-standing allies in the Middle East, be it, Saudi Arabia, Israel, or UAE among others. This has created a big void in the region, and with the Chinese siding with the Iranians with their humongous $400 billion investment, Putin is all set to fill the void and increase Russia’s zone of influence from Central Asia to the Middle East by luring America’s allies Saudi Arabia, Israel, and UAE close to itself.

The new violations by Tehran come at a time when the regime is trying to further pressurise Joe Biden into a nuclear deal and gain maximum brownie points before the deal is materialised.

These actions and nonchalant reactions by the US administration are widening the wedge between the USA and its MENA (the Middle East and North Africa) allies. And given the political astuteness of Vladimir Putin, he is certainly not going to miss this opportunity for Russia to gain a solid footing in the region.

Biden’s recent actions are taking the US relations with its alliance partners to a point of no return. It has not even been a month in the White House for the new American President and he is already on his path to destroy the legacy of his predecessor Donald Trump in the Middle East.

The US is pulling out of the Yemen War and leaving its ally Saudi Arabia in the lurch to fight the Iran-backed Houthi rebels. Furthermore, the Biden administration already has lifted sanctions on the Houthi rebels which were imposed during the Trump administration, thereby giving added cushion to Iran to pursue its geopolitical goals.

Russia is tapping into these tectonic shifts in the Middle Eastern political dynamics and is trying to get in the good books of what used to be the US allies by calling out Iran against its nuclear program.

As reported by state news agency RIA Novosti, Deputy Minister of Foreign Affairs of the Russian Federation, Ryabkov said on February 11, “We understand the logic of their actions and the reasons prompting Iran. Despite this, it is necessary to show restraint and a responsible approach.”

Russia has always balanced its relations with Arab nations and Iran. While it has stood by the sanctions-ridden country of Iran, it has also developed a strong relationship with Arab powers like Saudi Arabia and UAE. From economic cooperation in the OPEC to strategic cooperation as well, Russia has a deep interest in the Middle East. Its intervention in Syria against US-backed ‘rebels’ is one example.

The USA is committing the biggest blunder by making a retreat in the Middle East and its allies angry because of the irresponsible and inconsiderate actions of the Joe Biden administration. As a result, a large void has appeared in the region. Vladimir Putin, being a far-sighted politician, has understood the geopolitical arithmetic of the region perfectly.

China is now solidly in Iran’s corner and there is a high possibility of the Biden administration further cornering Saudi Arabia for the assassination of Jamal Khashoggi. Thus, Russia, by playing hardball with Iran, is trying to get into the good books of US allies in the region. And, by doing so, it is trying to fill the void which is being created by the actions of Biden administration.