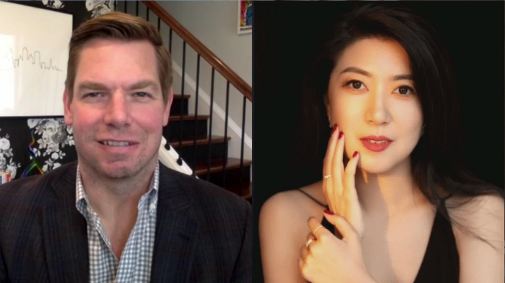 Rep. Eric Swalwell (D-Calif), a vehement Trump critic, was chosen as the House manager for Donald Trump’s impeachment trial. The Democrats had chosen him as their go-to-person for the former President’s impeachment. Swalwell allegedly tampered with evidence, tried to spruce things up but to no avail as Trump was justifiably acquitted. Now, it has come to light that Swalw ell had a ‘girlfriend’ who was a Chinese spy.

Chinese national Christine Fang targeted up-and-coming local politicians in the Bay Area and across the country, who had the potential to make it big on the national stage.

Among the most significant targets of Fang’s efforts was Rep. Eric Swalwell. Christine Fang took part in fundraising activity for Swalwell’s 2014 re-election campaign, according to a Bay Area political operative and a current U.S. intelligence official.

According to the same two individuals, Fang helped position at least one intern in Swalwell’s office and met with Swalwell over the course of several years at several events.

Eric Swalwell was one of the most outspoken supporters of the Democrats’ claim that Trump was a Russian agent. He went on record saying that he thinks that former President Trump is a tool of Russian President Vladimir Putin, often in cable TV interviews.

At the same time, Swalwell gained a reputation for not seeing China as the biggest danger facing the United States as what Trump administration policies and intelligence officials have labelled.

Early in his career, the Chinese secret service possibly targeted Mr Swalwell, dispatching Fang to support him while he was a member of the city council in the San Francisco Bay Area. She ended up working for Swalwell as a fundraiser and supported him by putting an intern inside his Congressional office.

The Chinese agent reportedly also had affairs with two Midwestern mayors, including one fling in the car of an Ohio officeholder who was not identified by name.

While frequently voicing hawkish views on Russia, his views on the China threat have been relatively benign.

An analysis of Swalwell’s statements during the House Permanent Select Committee on Intelligence’s open hearings revealed that he disagreed with those who said China was involved actively in U.S. elections and that Moscow was the only obstacle to intervene in U.S. campaigns. Swalwell dismissed the opinion of the intelligence community that China and Russia were behaving similarly during the 2020 election campaign during a committee hearing on Oct. 2.

During a hearing on intelligence politicisation, the Congressman insisted that Russia is a greater threat than China when it comes to such intervention.

Swalwell said, “I can say in open session that is false, and it is false for the American people to walk away and believe that there is any equivalence between what Russia and China are doing.”

Sen. Josh Hawley, concerned about Swalwell’s connection with Christine Fang, told a pool reporter during a break in the proceedings about Swalwell’s selection as an impeachment manager. He said, “That’s an interesting choice…somebody who’s part of a Chinese espionage ring effectively, so it’s a provocative choice,”

Other prominent Republicans have also scoffed at Swalwell’s role in the proceedings, including Sen. Rand Paul, who said, “This afternoon we have been lectured to by Eric Swalwell, a guy accused of consorting with a Chinese spy,” tweeted the Kentucky Republican. “How appropriate!”

This afternoon we have been lectured to by Eric Swalwell, a guy accused of consorting with a Chinese spy. How appropriate!

China must have been very happy to see a good return on their investment in Mr Swalwell. He got exposed but still kept his position and now became one of the leading democrats charging against the former President.

The same President who had broken China’s back with his policies united the world against Chinese belligerence and illicit activities and exposed WHO’s collusion with China in failing to contain the Wuhan virus. The sad part is all of this is being side-lined by the China loving democrat President and maybe we can now understand why.