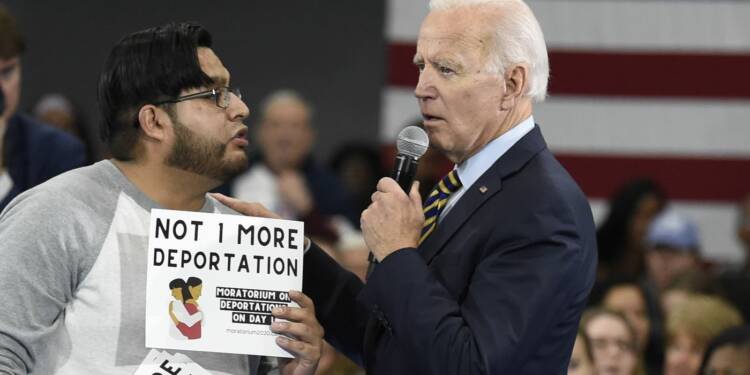 Trump’s prophecy of Joe Biden being a puppet of the radical left-wing movement is turning out to be true. Biden suddenly finds himself at the centre of a major split within the Democrats. On immigration, there are two factions- the moderates, who don’t want to go too far on the immigration front and the extremists, who describe themselves as progressives and profess radical left measures on the immigration front. Biden, however, is giving in to the latter.

Biden is looking to introduce his controversial immigration reform bill at the Capitol this week. But there are no big plans to introduce sweeping changes in American immigration policy which remains a top priority for several so-called progressive Democrats.

The Biden administration is facing a rapidly approaching April deadline to act. But moderate Democrats are looking to push through only popular immigration bills that are assured of bipartisan backing. The proposals that are likely to come up are legislation to pave way for granting citizenship to the undocumented group known as Dreamers and immigrants from war-torn areas.

Yet, the plan is going to leave the radical left-wing group of Democrats unhappy, which has since long pushed for a comprehensive revamp of the immigration laws. They see Biden’s Presidency as their only shot at meeting impractical goals like defunding ICE and conferring citizenship upon undocumented immigrants. This is the main lobby that is putting Biden under enormous pressure to introduce radical legislation for promoting immigration.

And now ahead of the introduction of the bill, the White House, on Tuesday, reaffirmed that President Biden backs a plan to create a pathway to citizenship to at least 11 million illegal immigrants. This controversial far-left idea has many Republicans and moderate Democrats rattled.

But this is hardly the first time that Democrats don’t agree on immigration. There is a Bernie Sanders-led group of Democrats such as Pramila Jayapal and Mark Pocan, who want Biden to muscle through extreme measures on immigration policy. And this broad division of extremists and moderates within the Democrats has always existed.

The extremists want a comprehensive immigration package that would completely change how the US enforces its immigration laws. The two factions have also been divided about the  U.S. Immigration and Customs Enforcement (ICE).

Some Democrat Extremists even ran the “Abolish ICE” hashtag and also made an attempt to actually eliminate the organisation that serves as the Department of Homeland Security’s enforcement arm. Jayapal was the one who lobbied heavily for getting ICE eliminated in the Trump era and even introduced legislation, along with Pocan, to get the agency eliminated. Yet, the moderate faction within the Democrats kept a safe distance from the legislative effort.

Even during the Presidential race, there was a clear divide among Democrats. While Democrats like Rep. Tim Ryan of Ohio wanted to take a pragmatic viewpoint on issues like border security and immigration, other Democrats used to denounce Trump’s immigration policies as bigoted and inhumane while demanding a complete revamp of the immigration laws.

But Biden is more of a tool of leftist propaganda. And in case of a deep split between the Democrats, he is likely to support the radical leftists led by Bernie Sanders. Right now, Biden is not pushing through extreme and comprehensive measures on immigration. He is not getting too soft on the immigration front and accomodating only small measures to satisfy the radical left.

Yet, Biden is a weak President, whereas the extremist lobby within the Democrats is too strong. Biden’s poll campaign too was hijacked by Bernie Sanders and this is why Biden had also ended up promising way too much on the immigration issue. Now, Bernie is using all his influence and trying to lobby for pro-immigration policies within the Biden administration.

The radical left has successfully infiltrated the Biden administration. And ultimately, it will show up in the form of imprudent immigration policies. The immigration issue might just prove how Biden is just a puppet of the Extremist Democrats.