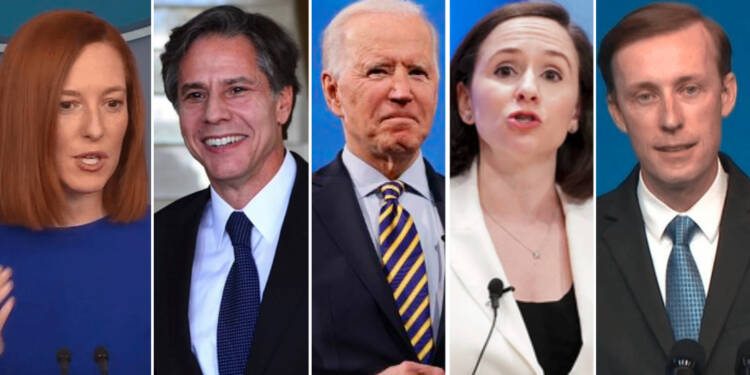 Joe Biden, the new President of the United States, has made several policy reversals and decisions favourable to only one country- China. Therefore, it doesn’t come as much of a surprise that his administration is filled with officials who have had links with the Chinese Communist Party.

The Biden administration’s affinity to China is well documented. It has gone ahead with dismantling and undoing all the feats that the former President had achieved. It was always believed that there were only ideological differences between the two US Presidents but new discoveries have been made.

It is becoming clearer now that ideological differences have played only a small part in the reversals. The real reason is the collusion between the US administrators and the CCP. In Team Biden – Antony Blinken, Jake Sullivan, Jen Psaki and Mira Rapp Hooper – all have well-established links with China and even the President is compromised.

Joe Biden’s Secretary of State Antony Blinken, his National Security Advisor Jake Sullivan, White House spokesperson Jen Psaki and Senior Adviser on China in Policy Planning Mira Rapp-Hooper – all of them have one thing in common, their affinity towards China and why? Because all of them have been part of organisations where their biggest client was the CCP.

Joe Biden’s Secretary of State – Antony Blinken was the co-founder of the West Exec Advisors, a consulting firm. The firm was involved in major deals of engagement with China, which had drawn scrutiny following Biden’s election victory. Suspiciously, West Exec removed from its website details of its China-related business purportedly after Antony Blinken’s nomination.

WestExec Advisors touted their work as helping major American universities court donations in China without jeopardising Pentagon-funded research grants. An archived version of the WestExec site states that “U.S. research universities” were among the company’s clients and that the consultancy worked with schools to “remain a trusted partner for DoD-sponsored research grants while expanding foreign research collaboration, accepting foreign donations, and welcoming foreign students in key STEM programs.”

Jake Sullivan, NSA to the Biden administration is another official in the White House with close connections and a personal affinity to China. Sullivan is known to have advocated for China’s “rise” in the past.

Jake Sullivan has also been a senior fellow at the Carnegie Endowment for International Peace, an organisation known for propagating pro-China sentiment and is also well funded by the CCP.

Moreover, in 2018, Sullivan was also named a Fellow at the Paul Tsai China Centre which has taken millions in Chinese Communist Party cash and counts Chinese government and military-linked individuals as fellows and speakers. The centre re-established itself in 2016 following a $30,000,000 donation from the son of the late Paul Tsai, Vice Chairman and co-founder of Alibaba Joseph Tsai. Alibaba, founded by Jack Ma, has close financial and personal ties with the Chinese Communist Party.

Mira Rapp-Hooper, Biden’s Senior advisor on China has also served as a fellow at the same centre. Yale’s profile page for the centre clearly reads, “The centre is the primary home for activities related to China at Yale Law School. The Centre is a unique institution dedicated to helping advance China’s legal reforms, improving U.S.–China relations, and increasing understanding of China in the United States. The centre works collaboratively with a broad range of top experts in the Chinese government, universities, and civil society on concrete projects designed to have a positive practical impact.”

It does not end there for the officials in the Biden administration. Jen Psaki, the press secretary for the White House under this administration was also on the payroll of the WestExec group not long ago. WestExec has dabbled in an array of consulting work, some of which involves US adversaries such as China and Russia. Now the members and a co-founder of the group are at the top of the command lines in the US government.

And it’s not just fellow officials from the Biden administration that have massive collusions with China. The President himself has been compromised.

A previously unreported press release from a US-based CCP Consulate reveals that Biden participated in a welcome reception with CCP Vice President Li Yuanchao featuring Tung Chee-Hwa. The press release said, “Prior to the meeting, Li Yuanchao held a welcome ceremony for Biden at the North Hall of the Great Hall of the People. CPPCC Vice Chairman Tung Chee-Hwa and others were present.”

So, who is Tung Chee-Hwa? Well, he is the Vice-Chairman of the Chinese People’s Political Consultative Conference (CPPCC), which has been identified as the “highest-ranking entity overseeing” China’s United Work Front according to the US-China Security and Economic Review Commission.

The effort, according to the US government report, aims to “to co-opt and neutralize sources of potential opposition to the policies and authority of its ruling Chinese Communist Party” and “influence overseas Chinese communities, foreign governments, and other actors to take actions or adopt positions supportive of Beijing’s preferred policies.”

While all these people are at the top of the chain of command at the US government, several other officials have also been exposed for their alleged links to China. These include – Treasury Secretary Janet Yellen, CIA director Bill Burns, and even US ambassador to the United Nations Linda Thomas Greenfield – all of whom have been found to have determining links with the CCP and harbour an affinity to China.

While Biden keeps reiterating his harsh stand on China, action on the floor has been next to nothing. The aforementioned revelation has made everything clear. Biden and his administration can never be harsh on China, they can provide the optics but will stop short of taking any major action, which raises one question: Is the administration fit for the job?