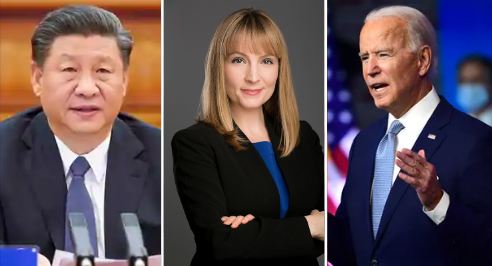 Hart’s affinity to China and then being nominated to an influential position in the Biden administration follows a series of people with major links to the CCP. These include Jen Psaki, Antony Blinken, Jake Sullivan and many more.

In Hart’s newfound role as China Policy Coordinator to the Undersecretary of State for Economic Growth, Energy and the Environment, she will “oversee a review of Trump administration policies” on China. Bloomberg noted she will be focusing on the Clean network initiative of the Trump team which encouraged countries to stop Huawei, a contentious and compromised telecommunication giant with links with the Chinese Communist Party.

Hart has participated in programmes and authored reports sponsored by a leading Chinese Communist-backed propaganda organisation. These organisations strive to increase their influence on foreign governments to take actions or adopt positions supportive of Beijing.

Moreover, Hart has also revealed the severe affinity she has towards China expanding their intellectual influence saying that she is “fine” with Chinese think tanks broadening their “international influencing” in the United States. As if her views were not enough to display her love for China, her actions speak for themselves. She secretly provided Chinese Communist Party Premiers with questions ahead of conferences.

Hart has also been on a trip sponsored by the China-United States Exchange Foundation (CUSEF) to Beijing as part of a Centre for American Progress (CAP) delegation back in 2013.

Hart, who served as Chinese Policy Director and CAP Senior Fellow in the course of Obama’s years as a think-tank of considerable influence, visited the communist country for a “US-China High-Level dialog.”

The September event addressed the results of a 110-page CAP study titled “Towards a New Model of Major Power Relationship,” calling on the two countries to develop stronger economic links and military cooperation. Academics from state universities, think-tanks, including the Academy for Military Science of the People’s Liberation Army were among Chinese Communist Participants.

The CAP report had encouraged that, “Officials and experts in both countries need a more effective dialogue with their citizens on the importance of the U.S.-China relationship and what new- model relations exercise is designed to prevent and achieve.”

Melanie Hart had also received a considerable shout-out for her contributions to the report. The report thanked her in the report and mentioned, “The National Security and International Policy team at the Centre for American Progress authored this paper in preparation for the September 2013 CAP-CUSEF High Level Dialogue in Beijing, China. The team would like to acknowledge contributions by Senior Vice President Rudy deLeon, Senior Fellow Nina Hachigian, Senior Policy Analyst Melanie Hart, Policy Analyst Ken Sofer, and intern Luke Herman on this report.”

However, this was just one of the many incidents of Hart’s contribution to positive engagement between the US and China. In 2015, a primer sent to John Podesta via email revealed that Hart was a delegation attendee for the “CAP-CUSEF High Level Dialogue.”

ASG, with many other Biden team members, of which Ambassador Appointed to the United Nations, Linda Thomas Greenfield, consults extensively with the Chinese Government and maintains its officials as consultants. The ASG has also been a “Chinese adviser” to the Scowcroft Group, the Albright Stonebridge Group (ASG), and the University of California Institute for Global Conflict and Cooperation.

While Biden keeps reiterating his harsh stand on China, action on the floor has been next to nothing. Therefore, hart’s inclusion in a team that has to work to counter China’s is not even surprising anymore. Biden and his administration can never be harsh on China, they can provide the optics but will stop short of taking any major action. The officials keep Chinese interests close to their heart rather than the interests of the United States, which again begs the question, Is the administration even fit for the job?