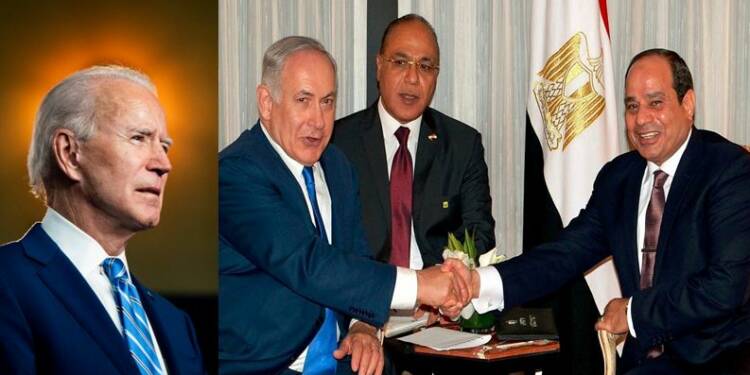 Since the installation of Joe Biden as the 46th President of the USA, the entire globe has been watching closely as to what Joe Biden’s policy is regarding the Middle-East. One month down the line, it is clear that the septuagenarian’s policies are a complete volte-face of his predecessor Donald Trump’s approach. Now, sensing hostility from the USA, the Middle Eastern state of Israel has taken the initiative to control the narrative.

Recently, Egypt’s Energy Minister Tarek el-Molla visited Israel to meet PM Benjamin Netanyahu. Together the duo discussed the volatile region of the Mediterranean and how the discovery of natural gas in the region was an “amazing opportunity” for cooperation between Israel, Egypt, and other countries on energy and other matters.

Meanwhile, Tarek also became the first Egyptian minister to visit Israel since foreign minister Sameh Shoukry met with Netanyahu in 2016. While the visit can merely be seen from the optics of a routine diplomatic meet but its implications are far wider than what is being projected. By banding together as one, Israel and Egypt have sent a stern message to American President Joe Biden.

Firstly, Biden has been reminded by Israel that it that will not be pushed around by the Democrats just so they can satiate their bruised egos. The biggest failure of the Joe Biden administration has been the lack of a clear and cohesive foreign policy regarding Israel and Iran. While the US ally Israel is increasingly drifting away from Washington, the complacency of Joe Biden is simultaneously allowing Iran, Israel’s biggest nemesis, to reach its dreams of developing its own nuclear bomb – all whilst Biden desperately tries to restore the 2015 US-Iran Nuclear deal.

In a show of insincerity, Biden called Netanyahu nearly after a month of his Presidency and Jerusalem is getting antsy about the cold shoulder treatment that Washington is extending to it. The signing of the Abraham accords under former President Trump was seen as a watershed moment that would bring Israel into the mainstream. But Netanyahu’s rapport with Trump was too much for Biden to take so, he is undoing all the work that benefitted Israel and brought peace to the Middle East. Adding insult to injury, the Democrat President is also raking up the Palestine issue which certainly has not gone down well with Israel.

As for Egypt, President Biden has made no attempt to hide his animosity for the leadership of Egypt which had ousted the Muslim Brotherhood government. As a presidential candidate, Biden had tweeted, “No more blank checks for Trump’s ‘favorite dictator,” referring to President Abdel Fattah Al-Sisi.

Moreover, the threat of Turkey and its illegal militia in the Mediterranean eyeing the precious oil resources is reason enough to join hands in a much greater capacity with Israel. Reported by TFI extensively, a declaration was signed in May last year by a combined bloc of Cyprus, Egypt, France, Greece, and the UAE denouncing Turkey’s illegal drilling efforts around Cyprus, its military intervention in Libya, and its maritime borders deal with the GNA.

Furthermore, Egypt dreads the Muslim brotherhood if it again gains power in the unstable region in the form of a radical Erdogan’s Turkey. After the Arab spring, Egypt had a horror experience with the brotherhood, and Turkey and its madmen leader Erdogan still support the extremist ideology. Thus siding with a military superpower like Israel is going to put pressure on Ankara which will think twice before coming for Egypt’s resources.

Mohamed Amashah is finally home after 486 days in Egyptian prison for holding a protest sign. Arresting, torturing, and exiling activists like Sarah Hegazy and Mohamed Soltan or threatening their families is unacceptable. No more blank checks for Trump’s "favorite dictator." https://t.co/RtZkbGh6ik

The eastern Mediterranean is arranging itself into a stronger regional alliance — with Isreal orchestrating the entire chain of events. Biden can only ignore the situation for so long. Jerusalem is slowly bringing the Middle East into its alley and if Biden wants to play the big, broody villain in this encounter then it certainly will be a big strategic blunder and a massive ‘egg on the face’ moment for America which has started trudging down the suicidal path charted by none other than, former Democrat President, and recipient of ‘Nobel Peace prize’ Barack Obama.