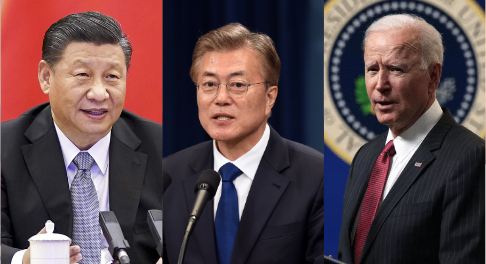 Xi Jinping and the Chinese Communist Party are observing the best possible foreign policy developments for Beijing. The Chinese were expecting the world would come raining down on them, as soon as the pandemic fades away. But on the contrary, the policies of Joe Biden are giving Beijing more and more legroom to increase its influence in its neighbourhood and beyond. As per news reports, China’s state broadcaster China Central Television (CCTV) announced late Monday evening that it has signed a strategic partnership in programme development and online video with South Korean public broadcaster KBS.

The move is a strong indication of an attempt to ease the tensions between the two countries that have for years left Korean content unofficially banned in the mainland. The move is an obvious shift in the Chinese policy towards South Korea. With the absence of the USA in East Asia and Joe Biden going back to the Obama era policy of isolating North Korea, China has found the best opportunity to placate Seoul and bring it into its corner.

South Korea had been shut out of the China market since 2016 in retaliation for Korea’s agreement to allow the deployment of the U.S. anti-missile defence system THAAD, a move that sorely angered Beijing. However, with the ascendance of Joe Biden as the leader of the United States, the differences between the East Asian allies of the USA have increased and in this, China sees an opportunity.

South Korea’s Defence Ministry dropped its description of Japan as a “partner” in the latest defence white paper, the move was painted by local media as a “downgrade” that reflects worsening ties between the two countries. This development had made China sure that the USA is not actively involved in managing its alliance in East Asia as was the case during the Trump administration.

Read more: Trump had kept Japan and South Korea in absolute harmony, with Biden in the white house, both countries are at each other’s throats

In addition to this, South Korea is already concerned about the possibility that Joe Biden will undo all the good work Donald Trump did, vis a vis North and South Korean relations. Recently the South Korean President has nominated Chung Eui-yong, as the Foreign Minister of South Korea. Chung is a former National Security Advisor who was involved in the failed 2019 summit between North Korea’s Supreme Leader Kim Jong-un and former US President Donald Trump. The latest nomination came hours before Joe Biden took over as the US President and is being seen as a signal from Seoul to revive the stalled denuclearisation dialogue with North Korea. With these things taking place, China is positive that it can succeed in bringing US ally South Korea to its side.

Read more: South Korea’s message to Biden is loud and clear – follow Trump’s policy on the two Koreas or we will do it ourselves

China, considering all these developments and recognizing the sublime and laid back foreign policy approach of Joe Biden, has come to the realization that South Korea is up for grabs, and with the wedge between Seoul and Tokyo growing, it may very well succeed in taking the South Koreans into its fold. “This year is the year of Sino-Korean cultural exchange,” said CCTV, which echoes the party line of the ruling Communist Party, in its brief announcement of the deal. CCTV and KBS “signed a video-type cooperation agreement… in order to implement the consensus reached by the heads of state of China and South Korea,” it explained, without providing further details as to what sort of cooperation would occur when.

In 2021 and 2022, ahead of the Beijing Winter Olympics and the 30th anniversary of their establishment of diplomatic relations, the two countries have agreed to participate in greater cultural exchange. With Joe Biden not at all interested in dealing with the complexities of East Asian political dynamics and considering its allies concerns, China is all set to take over the ground which the USA has ceded.