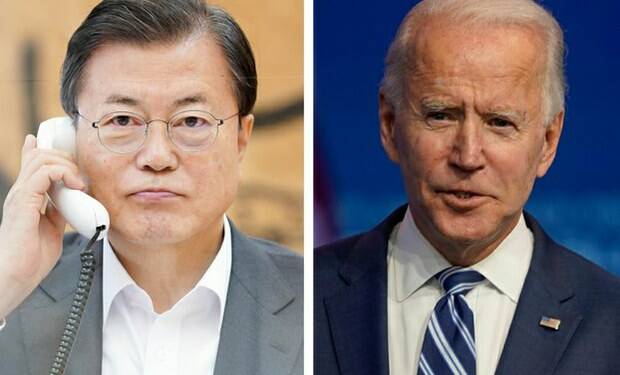 Democrat leader Joe Biden may have taken oath as the President of the United States of America, but a key Washington ally is asking him to follow Trump’s policy in order to take the alliance forward. We are talking about South Korea, a major US ally in East Asia.

The South Korean President has nominated Chung Eui-yong, as the Foreign Minister of South Korea. Chung is a former National Security Advisor who was involved in the failed 2019 summit between North Korea’s Supreme Leader Kim Jong-un and former US President Donald Trump. The latest nomination came hours before Joe Biden took over as the US President and is being seen as a signal from Seoul to revive the stalled denuclearisation dialogue with North Korea.

Now, Chung’s nomination is a highly symbolic move on the part of the Moon administration in South Korea. It shows how Seoul continues to hold faith in Trump’s policy of engaging North Korea in denuclearisation talks. Biden, on the other hand, remains a fierce critic of Trump’s policy to push mediation talks with North Korea’s Supreme Leader.

In fact, the pro-Biden and pro-Democrat propaganda in the US used to insinuate that Trump likes dictatorial leaders, which is why he engaged North Korea in denuclearisation talks.

But South Korea’s President Moon Jae-in is now making it known to Biden that Seoul would continue to follow Trump’s policy. Recently, Moon even asked Biden to hold dialogue with North Korea, and build upon the progress made by Trump and Kim at their first meeting in Singapore. In their Singapore meeting, Kim and Trump had agreed to foster new relations and work toward denuclearisation of the Korean Peninsula.

Earlier, Moon was only requesting Biden to follow Trump’s strategy on denuclearisation of North Korea. But now, by nominating someone who has been at the forefront of the agenda to hold dialogue with North Korea, the South Korean President is making it clear that regardless of the political changes in the US, Seoul is going to continue with Trump’s Korean policy.

Read More: Why South Korea is not very happy about a possible Biden presidency

For Biden, South Korea’s aspirations are too important to ignore. Remember, Seoul is a major US ally and no American President can simply let it go. Moon is therefore conveying that Biden could lose Seoul as an ally if he doesn’t continue to follow Trump’s policy on North Korea.

North Korea’s denuclearisation is a matter of national security for the South Korean President. He couldn’t care less for Biden’s ideological agenda and biases. Within Seoul’s strategic circles, it might have been understood that Biden isn’t going to meet Kim and kickstart a dialogue between Washington and Pyongyang. Yet, Seoul, at least, expects that Biden won’t play spoilsport in South Korea’s own efforts to negotiate the denuclearisation of the Korean Peninsula with Kim Jong-un.

As such, South Korea has given a loud and clear message to the new US President Joe Biden- follow Trump’s policy on the two Koreas or we will do it ourselves.

‘Trump got China right,’ Biden’s Secretary of State and Defence Secretary are all praises for Donald Trump