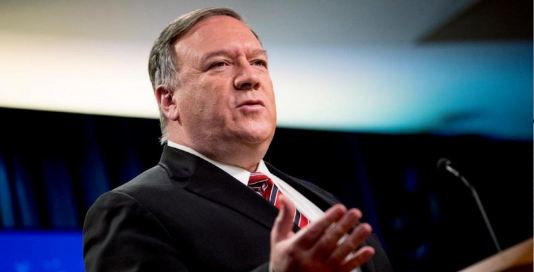 Donald Trump is no longer the US President and his key aide Mike Pompeo doesn’t handle American diplomacy any longer. But Pompeo has a key message for US allies- hang in for the next four years and stick to Trump’s anti-China policy because he will come back to power.

Pompeo gave a long speech at the Conservative Political Action Conference (CPAC) in which he showed how Biden’s foreign policy is an all-round failure. At the same time, Pompeo endorsed Trump’s “America First” foreign policy that includes accomplishments like eliminating Iranian General Qasem Soleimani, debilitating Tehran, reining in China and brokering Abraham Accords. The purpose was to tell US allies that while Biden is the US President, Trump has the plot.

Pompeo has actually launched one of the fiercest attacks on President Biden to date. Last week, the former US Secretary of State tweeted, “The Biden Administration claims “America is back” – but America didn’t go anywhere. Quite the opposite. We built enormous coalitions all around the world to secure American freedom. We made America more prosperous and much stronger.”

The Biden Administration claims "America is back” – but America didn’t go anywhere. Quite the opposite. We built enormous coalitions all around the world to secure American freedom.

We made America more prosperous and much stronger.

During his CPAC speech too, Pompeo took a dig at Biden and his foreign policy. He said, “I hear President Biden saying America’s back. Back to what? So back to pallets of cash to the Ayatollah, so he can build muscles that threaten us. Back to apologizing when Iranians tell our soldiers and sailors to take to their knees at gunpoint.”

Finally, Pompeo added, “And we certainly don’t want to go back to letting China have trade deals that kill our jobs right here in America. We can’t afford it. We can’t afford it. It’s not the right thing. And we don’t have to do it. We must be bold. And we must always put America first.”

During his CPAC speech, Pompeo slammed the Biden administration left, right and centre. He talked about Biden going soft on Iran, letting China kill American jobs and “supporting a pipeline in Europe that’ll create European jobs.” However, in an interview with Fox News on the sidelines of the CPAC, the former US Secretary of State also spoke specifically about China.

Pompeo said that the Biden administration has sent “mixed signals” regarding China’s State-sponsored persecution of religious minorities in Xinjiang. He also called on the administration to impose “real costs” in Beijing. Pompeo expressed concern about how UN Ambassador Linda Thomas-Greenfield said that the genocide designation against China would be reviewed owing to procedural issues.

The Republican leader had previously expressed concern about Joe Biden’s remarks that “culturally, there are different norms that each country and their leaders are expected to follow.”

Fox quoted Pompeo as saying, “If forced sterililization and forced labor, separating families, the internment of a million people with the aim of the destruction of people who are non-Han Chinese, if that’s not genocide then the world has lost its way.”

Pompeo remains quite blunt on the China issue. He said, “When the Chinese wanted to come steal your job, we (Trump administration) just said no way. 40 years, bipartisan, Democrat and Republican, 40 years of failure letting made in China crush us was going to stop. We demanded fair and reciprocal trade.”

The former Secretary of State added, “We protected the American worker from the Chinese Communist Party’s predation on us here in America.”

Pompeo has been street smart in drawing a comparison between how Trump handled China and how Biden would handle China. The former was bold and straightforward in his approach, whereas the latter is giving mixed signals. This message isn’t only for the local American audience, but it will also be served to US allies around the world. They are being told that they must stick to Trump’s foreign policy if they want to keep China in check.

At the same time, Pompeo, who is himself being seen as a potential Presidential candidate, has put all his weight behind Trump. Pompeo is one of Trump’s staunchest allies and with his CPAC speech, he is showing how strongly he will back his former boss.

Pompeo is different from Republicans like Nikki Haley, Mitch McConnell and Mitt Romney. He has never criticised Trump for political gains. All Pompeo wants to do is to keep the anti-China sentiment alive, by telling US allies that Trump’s prudent foreign policy is the way forward. Pompeo has made it clear that ultimately he will be coming back to power and decoupling from China will continue.