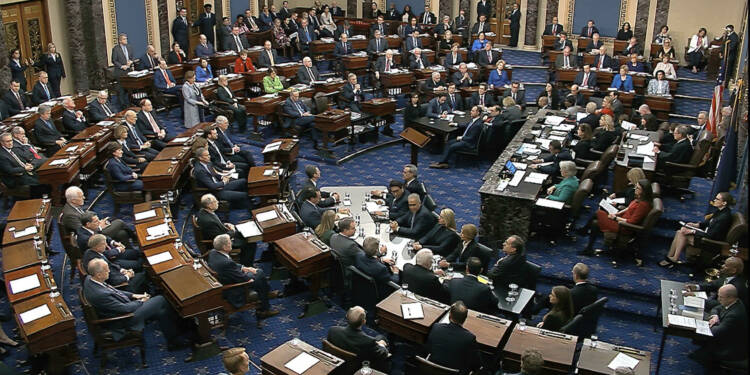 The Democrats are pushing for the abolition of the filibuster. Their left-leaning agenda is being countered by the Republicans using the filibuster and the Democrats want to silence the voices. They do not want the opposition and are seeking a complete monopoly over the legislature, and if they get their way, no one could stop them.

A filibuster is a political procedure where one or more members of parliament or congress debate over a proposed piece of legislation to delay or entirely prevent a decision from being made on the proposal. The Democrats’ left-leaning agenda has been on full display since Joe Biden was sworn in as President. First, he used executive orders, a record 42, in his first week. Now his party is pushing to abolish the filibuster in order to quell any resistance they might face in pushing their agenda.

To end debate on major measures, the Senate needs 60 votes. Opponents want to eliminate the preliminary barrier, which has been used by both parties to stymie controversial legislation and instead allow bills to pass with the simple majority of 51 votes needed when senators of both parties are present.

Both parties have used the filibuster over the years, but libertarians have used it more effectively and consistently especially at the time of the Trump administration. Proponents argue that it necessitates compromise and negotiation.

Senator Tina Smith of Minnesota took to Twitter on Thursday to express her support for abolishing the filibuster. “The Senate needs to abolish the filibuster. She wrote, “It’s undemocratic,” and added, “We need to move this country forward.”

Senator Amy Klobuchar, the state’s senior senator and a 2020 standard-bearer for her party’s moderate wing, said a House voting rights bill’s imminent demise in the Senate had flipped her from a “maybe” to a “yes.” Ms Klobuchar is also the chairwoman of the Senate Rules Committee, she told Mother Jones magazine, “I will get rid of the filibuster. I have favored filibuster reform for a long time and now especially for this critical election bill.”

Another centrist, Montana Senator Jon Tester, has taken a wait-and-see approach but has recently indicated that he, too, might be willing to repeal the law.

The progressive Democrats are scared. Even after regaining control of the Senate, they are concerned that their legislative ambitions will be dashed by Republicans unless the president and moderate Democrats listen to their calls to abolish the filibuster.

Elizabeth Warren, the senator from Massachusetts, underlined why the democrats are pushing for the abolition of the filibuster. She said, “The piece in front of us right now is the minimum wage. But the piece that is coming up is the Voting Rights Act, and the piece after that is immigration reform, and another piece is universal child care.

“If we want to deliver on our promises, we have got to be willing to get out there and fight for it, and that starts with getting rid of the filibuster,” she added.

But even as the calls inside the Democrat party grow to do away with the filibuster, some democrats do realise that the filibuster provision is important. Two Senate Democrats, West Virginia’s Joe Manchin III and Arizona’s Kyrsten Sinema have stated that they would oppose any attempt to repeal the law, making any abolition of the provision a long shot.

Compromise and negotiation are necessary for a democracy to function. A partisan law will create divisions in society. But as the Democrats hold only a slight majority in the senate they wish to do away with the filibuster provision because they know that their staunch left-leaning ideas have been found out and they will never be supported by the Republicans or the Americans who believe in America first.