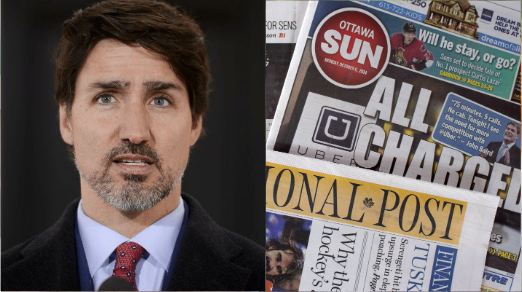 The role of a legitimate news media should be to critically analyse each and every action of the government and keep the ruling dispensation on its toes. However, the Canadian media, pandering to its left-liberal biases, keeps Canada largely aloof of the wrong and careless actions of the current liberal government of Justin Trudeau.

Instead of being vigil on the actions of their government, the left-liberal dominated media in Canada shifts the attention towards the incidents and events happening in the United States. They act like they represent the 51st state of the United States and not the sovereign country that Canada is.

According to reports, people are more likely to find openly biased reporting on left-leaning media portals such as HuffPost or Salon. Some studies have found that the CBC has a left-centre bias. Although they tend to show their biases less overtly, however turning a blind eye on the current events in Canada that are not in synchronisation with its biases, shows the dangerous nature of their biased reporting.

There is enough evidence to prove the point. The Canadian handling of the COVID-19 pandemic was worse than abysmal. The country took 11 months after the declaration of the Wuhan virus as a pandemic, to make it mandatory for international travellers to provide a COVID-19 negative report at their arrival. Anyone who has even a basic understanding of how the virus spreads, for them, the magnitude and severity of this carelessness of the Canadian media becomes all the more apparent.

However, the more shocking fact of the matter is that no major news media outlet in Canada has covered these topics relentlessly. When the government had not mandated the necessary steps to curb the pandemic, no major media house pushed the government or even queried them for their actions. At that point in time, Canadian media was busy scrutinising the mishandling of the pandemic by the US government and other things happening in the USA, as if they were the 51st state of the USA.

The last year’s WE charity investigation was the third ethics investigation within his then five years in office over the government’s decision to task WE with administering the program. All these scandals and lacklustre management of the pandemic did not garner the intensity and the consistency of the criticism that was warranted, and it was simply because of the fact that Canadian media largely has a left-liberal bias, which makes it look the other way when the government does something catastrophically foolish.

The Canadian media focuses on the news which is either focused on something unrelated to the Trudeau government or entirely on the issues facing the USA, thus keeping the Canadian population aloof of what is happening in their own country. The Canadian media treat their country like it is the 51st state of the United States of America and thus focus on anything but the local news, totally pandering to the ruling government of Justin Trudeau.