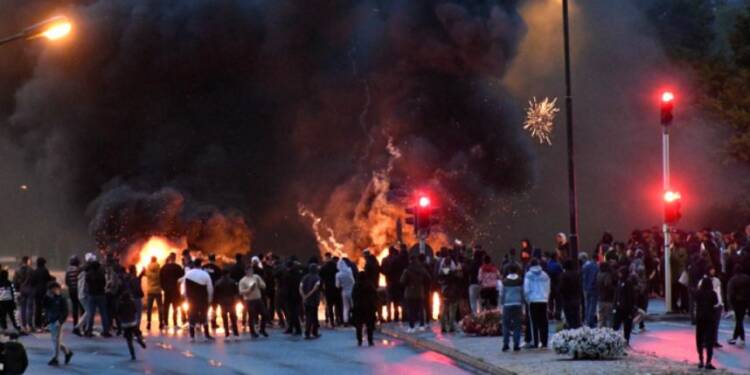 Sweden – the sweet little northern Nordic country tucked cutely between Norway and Finland has widely been famed for its extravagant social welfare programs and open-arms policy. However, the people of Sweden are no longer fans of their country’s policy of keeping its borders open for just about anyone to walk in at will. When it comes to making fundamental choices, any people, no matter which country they are from, will choose safety and security over lavish welfare schemes. For pray tell, what will a dead person possibly do with monthly welfare cheque if not alive in the first place?

In the past one decade, the small European country has started burning itself from within – and the flames of radical Islamism now threaten the very fabric of Swedish society. Sweden has always been an open country, and its people have been more than welcoming towards those who wish to live alongside them. However, for the past ten years, particularly after the 2015 migrant crisis, Sweden’s society has lived in fear of migrants who have entered the country from Syria, Somalia, Afghanistan, Iraq and other Muslim nations. Now, Sweden has become a prime example of why borders must never be opened to hordes of exclusivist people seeking to wage war against any person not subscribing to their theological ideologies.

Sweden has been facing ruination for quite some time now. Yet, some Swedish institutes continue to conveniently ignore their own backyard – which resembles scenes of a forest fire, to preach the world’s largest democracy about how its free ethos are being diluted. That, however, is not our point. What needs to be addressed is the growing resentment within Sweden towards refugees and asylum-seekers – largely of Islamic descent. This resentment has caused an alleged neo-Nazi party to gain tremendous ground across the country. Ironic, how the right ideology is growing by leaps and bounds in Sweden, even though the country’s institutions accuse India of becoming an authoritarian country due to a seemingly right-wing party being in power in New Delhi.

So, it becomes necessary to analyse the woes of the Swedish people, who are simply becoming averse to the idea of sharing their country, neighbourhoods and homes with ‘migrants’, most of whom will break into a dance of violence and mass killings at the drop of a hat. According to a report published by Brookings in March, Sweden has historically been a safe haven for refugees and, after Canada and Australia, has taken the most refugees per capita. Between 2013 and 2014, Sweden granted permanent residence permits to all Syrians in Sweden who sought asylum and since the beginning of the Syrian war, over 70,000 Syrians have entered Sweden.

According to the same report, in 2015, Sweden received a record 162,000 applications for asylum primarily from Syria, Iraq and Afghanistan. The proportion of Sweden’s population born abroad is one of the highest in Europe. In 2017, 18.5 per cent of Sweden’s population was born abroad, compared with the EU average of 7.2 per cent. According to an ODI country profile, Sweden is also home to the seventh-largest proportion of refugees per capita globally. In 2011, only 8 per cent of Swedes believed that migration was the most important issue facing the country; by 2016, the figure skyrocketed to 44 per cent.

Due to rampant immigration, Sweden had as early as 2017 resorted to making cuts to the funds provided for the welfare of Swedish citizens. There has been a housing crisis on for quite some time as the ‘housing for all motto’ appears to fail. This, while pensions and the support for elderly people have been cut too. Apart from immigrants depleting Sweden’s overall fiscal health over the past few years, there has also been sporadic growth of Islamist ghettos which have been labelled as “no-go zones”. In these areas, drug peddling, paedophile and sex crimes and attacks on police are common occurrences. With the rise in Islamist immigrants, anti-Semitism and atrocities of Jews have also witnessed a sharp increase in Sweden. As a matter of fact, the crime rate as a whole has seen an astronomical upswing after Sweden decided to allow a demographic invasion of itself.

As per Swedish National Council for Crime Prevention (Bra), which is the keeper of crime statistics between 2012-2016, the murder rate increased by 70 per cent. The rape rate between 2007-2015 shares the same figure. Religious crime, meanwhile, is not a term which would be right to do justice to the conditions prevalent in Sweden. The freedom of legitimate Swedes to exercise their right of free speech has narrowed down tremendously, if not evaporated completely already. Last year, the world for the first time came to know of the deep-seated hatred harboured by migrants (largely Islamists) for the people of Sweden. Malmo – a migrant infested city, saw violence of a kind previously unknown to Sweden, as hundreds of Islamists took to running a free riot on the streets in protest of what they believed to be “anti-Islamic activities”. Malmo is the same town where Jews are openly abused, targeted and harassed by Islamists.

Opening up the borders to a sea of blood-thirsty, exclusivist Islamist refugees and asylum speakers has now fared well for Sweden. As such, the country has become a case in point of why experimenting with the permeability of borders is a bad idea from the word go.