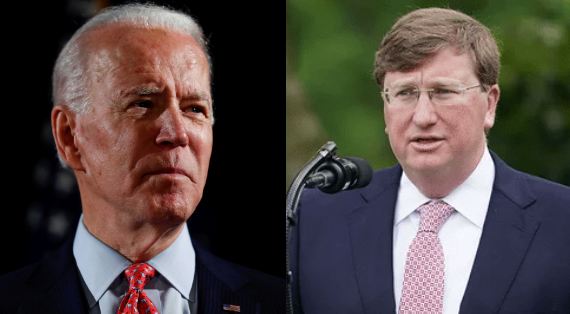 The United States of America is getting polarised due to the divisive, short-sighted and vastly unpopular policy decisions of President Joe Biden. As such, it does not come as a surprise that many states are now rising up against the mindless and discriminatory governance of the Biden administration. Soon after assuming office, Biden had signed an Executive Order, by the decree of which, transgenders were permitted to participate in athletics and sports under the girls or women category. The move had drawn widespread criticism from women athletes and activists, and now, one state has taken the lead in pushing back against Biden’s absurd far-left policies.

The state of Mississippi has passed a legislation which prohibits transgenders from participating in athletic and sports events under the girls or women’s category. The pathbreaking legislation, which is being seen as a symbol of resistance against Biden’s brazen shoving of far-left policies down the throats of Americans, was signed by Governor Tate Reeves on Thursday. The legislation calls on K-12 schools, as well as colleges and universities, to designate all sports teams for men and boys, women and girls or “co-ed.” It states that “Athletic teams or sports designated for ‘females,’ ‘women’ or ‘girls’ shall not be open to students of the male sex.”

Taking to Twitter, Governor Tate Reeves said, “I never imagined dealing with this, but POTUS left us no choice. One of his first acts was to sign an EO encouraging transgenderism in children. So today, I proudly signed the Mississippi Fairness Act to ensure young girls are not forced to compete against biological males.”

I never imagined dealing with this, but POTUS left us no choice. One of his first acts was to sign an EO encouraging transgenderism in children. So today, I proudly signed the Mississippi Fairness Act to ensure young girls are not forced to compete against biological males. pic.twitter.com/INZgKQRMJr

By standing up to Joe Biden’s authoritarianism, the state of Mississippi has set a strong precedent for over twenty other states who are working on similar legislation in order to bring back fairness in athletics and sporting, particularly for women, who have been deprived of their rights to contest in a free and fair environment in which they feel safe. In January, President Biden had signed an executive order banning discrimination based on gender identity in school sports and elsewhere. Sounds noble, right?

But here’s the reality. The executive order went on to make life hell for women athletes, who have been losing to biological males identifying themselves as females. This, because such males, or transgenders have an added physical advantage while competing against women in sports. Four accomplished female athletes had filed a lawsuit in federal court in Connecticut in February 2020. The lawsuit was filed by the athletes who were fighting for their right to be sportswomen after they kept losing track meets to ‘biological males’ who identify as ‘females’.

The women of Mississippi will no longer be victims of this blatant state-sponsored discrimination, and will be able to pursue sports freely. Other states, meanwhile, will now be emboldened to take Mississippi’s lead and make life better for women – at a time when the Biden administration is working to make women feel sorry for who they are. One would have thought that Biden would have stopped his anti-women rampage after his first executive order to the same end met with stiff resistance. However, that is not the case.

Read more: The Equality act– a bill that will make the biological definition of gender ‘invalid’

In fact, Joe Biden is now putting his weight behind the draconian ‘Equality Act’. The Equality Act ‘updates’ the law Congress passed primarily to combat racism, the Civil Rights Act of 1964, and adds sexual orientation and “gender identity” as protected classes akin to race. The practical implication of this law would be phenomenally disastrous. If it becomes law, any man who merely ‘identifies’ as a woman would have a right to spend nights in battered women’s shelters, disrobe in women’s locker rooms and compete on women’s sports teams. On the basis of one’s ‘gender orientation’, the draft legislation mandates access to ‘a toilet, a shower space and a changing room’, among other meeting areas to any man identifying as a female. Essentially, women’s private spaces would be made open to be invaded by anyone.

Joe Biden has been working overtime to desecrate all known gender norms, in line with the larger ‘woke-pandemic’ that has gripped America. However, sanity is not yet lost in the United States, as states take to push back against crazy policies and decisions being forced upon them by Biden. Whether it be the issue of maintaining gender sanctity or the fight against Big Tech, it is the states which are picking up the mantle of resistance to federal overreach, and striving to keep their citizens free as they brave out the dark and cold term of Joe Biden’s presidency.

OVAL SHAPED TEETH – the shape for disciplined and organized people