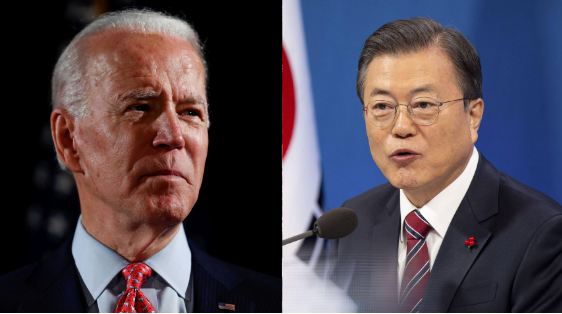 What happens when a weak state head succeeds a charismatic leader? The weak leader tends to live under his predecessor’s shadow. Who knows this better than Joe Biden. American allies simply don’t let him move away from Trump’s policies. Take South Korea for instance.

South Korea is reportedly considering joining the Quad- an informal, anti-China alliance that presently comprises India, Japan, the US and Australia. The object of South Korean plans to join the Quad is to put more pressure on Biden for following Trump’s North Korea policy.

The latest development about Seoul’s plans to join ‘Quad-plus’ is coming from an op-ed published in The Hill. The op-ed has been written by Hwang Ji-hwan, a member of the South Korean President’s commission on policy planning, and his co-author Ramon Pacheco Pardo.

The op-ed claimed, “The Moon government is even pondering whether to join a potential Quad+ to show its commitment to the U.S.-ROK alliance and, indirectly, influence Biden’s North Korea policy.”

So, what exactly does South Korea want? It wants Biden to continue Trump’s policy of engaging with North Korea’s Supreme Leader Kim Jong-un, in order to effectuate South Korean President Moon Jae-in’s wish of laying the groundwork for Korean peace. Moon’s term will end next year and before leaving office, he wants to improve inter-Korean relations.

The Hill op-ed states, “The South Korean president believes it is his duty to lay the groundwork for a sustainable inter-Korean reconciliation process. For this to happen, it is necessary to ease sanctions on North Korea. Otherwise, there won’t be large-scale inter-Korean economic projects. And this is what North Korea wants: economic development. Pyongyang has made clear that aid and ad hoc projects are not a priority in its relations with Seoul.”

The op-ed further notes, “The U.S. holds the key to allow sanctions waivers. But will it? After all, the Biden administration maintains that the denuclearization of North Korea remains its ultimate goal.”

Seoul however doesn’t want Biden to move back to the Obama era and reinstate the “Strategic Patience” doctrine of his former boss.

The op-ed elaborates, “South Korea is aware that the new administration has a host of domestic and foreign policy priorities more important to Washington than North Korea. So it wants to make sure that the policy review process does not drag on for months on end. Or worse, that it ends up with a decision to pursue “strategic patience 2.0.” The policy implemented by the Obama administration essentially kicked the can down the road, allowing North Korea to further develop its nuclear program.”

It added, “But the Biden administration might be tempted to revive President Obama’s policy anyway, given its many other foreign policy concerns. This would be a disaster for Seoul.”

So, South Korea finds a tangible solution in joining the Quad-plus, as an extended Quad might be called. Seoul understands that other Quad constituents- Japan, India and Australia, too shared close ties with the Trump administration and so they won’t object to Seoul’s bid to become a member of the informal alliance. The Biden administration itself won’t be in a position to say no.

Joining the Quad can go a long way for South Korea. Seoul’s plan is to make the inter-Korean negotiations a part of the anti-China alliance. And since the Biden administration likes to pretend that it wants to create a multilateral front against Beijing, becoming a part of the Quad will give Seoul more bargaining power on the North Korea front as well.

Finally, there is a strong realisation within Seoul that Beijing isn’t letting the Korean Peninsula move towards peace. China is, of course, prejudiced when it comes to inter-Korean negotiations and as such the Communist nation wants Pyongyang to continue functioning as its nuclear-armed proxy. But if an anti-China alliance takes the lead in brokering an inter-Korean peace deal, then Beijing itself might get sidelined.

Finally, Seoul could be giving a soft signal by joining a multilateral alliance that also includes Japan. South Korea and Japan may have historical differences, but by becoming a part of a closely-knit alliance, they can move towards burying their old differences and focusing on more important issues like China and North Korea.