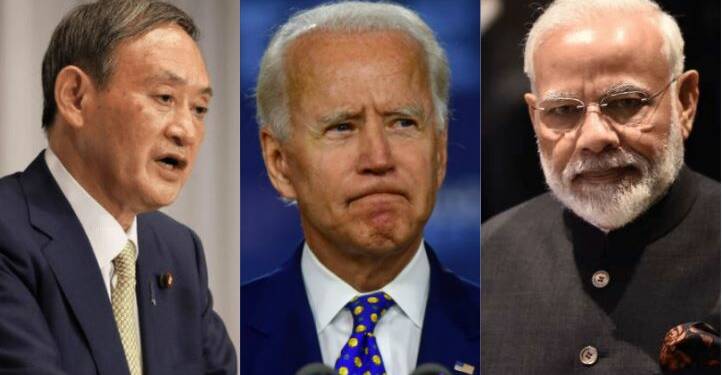 Three days before the first-ever Quad leaders’ meeting on March 12, the Prime Ministers of India and Japan spoke to each other for a vast forty minutes on Tuesday, in which China and its unending belligerence were named and shamed. Japanese Prime Minister Yoshihide Suga dialled his Indian counterpart, in order to impress upon Prime Minister Modi, the seriousness of China’s expansionist acts all across the East China Sea, particularly in the South and East China Seas. The phone call between the two Quad-constituents assumes significance, as it is a clear signal to US President Joe Biden to not act against the interests of the countries which are victims of Chinese belligerence in the region.

The two leaders recognised that it was increasingly important to abide by the importance of a ‘Free and Open Indo-Pacific’. A release issued by the Ministry of Foreign Affairs of Japan stated, “The two leaders shared the recognition that cooperation towards realizing a Free and Open Indo-Pacific is becoming increasingly important and to this end, shared the view to steadily advance both Japan-India bilateral cooperation and Japan-Australia-India-U.S. quadrilateral cooperation.”

Prime Minister Suga particularly, made it a point to himself inform Prime Minister Modi of the various dangers posed by China to the Indo-Pacific region. Suga “expressed serious concerns regarding unilateral attempts to change the status quo in the East and South China Sea, China’s Coast Guard Law and the situation in Hong Kong and the Xinjiang Uyghur Autonomous Region (XUAR).”

Make no mistake, the 40-minute phone call between the Prime Ministers of India and Japan has sent a stern message to President Joe Biden and his administration, that no amount of pro-China sentiment is welcome within the Quad. As a matter of fact, the very foundations of Quad were laid during the Trump-era with the aim of taming China. Yet, in his first month in office, Joe Biden took to prostrating before Beijing, diluting the Quad arrangement and weakening the Trump administration’s Indo-Pacific pivot.

This has led to China getting emboldened, and countries like India, Japan and Australia are not a tad bit impressed with Biden’s overzealousness to woo the paper dragon. For the past one-month, Quad member states, especially Japan, have been sending warning signals to the United States to not act squeamishly when it comes to dealing with China. Yet, for one whole month, Joe Biden did just that, irking American allies in the region. Shifting goalposts from a “Free and Open Indo Pacific”, to using more lenient phrases like a “Secure and Prosperous Indo Pacific” has not gone down well with Japan, India and Australia, apart from the many other countries of the region.

Yet, it would be unfair on our part to suggest that Joe Biden has not come back to his senses. In fact, after one whole month of misadventures in the Indo-Pacific, Joe Biden has realised that wooing China will alienate America among its regional allies. Therefore, Biden is now in a damage control mode and is instead trying hard to earn back the trust of countries like Japan and India. So, the Free and Open Indo-Pacific concept is back in play, and the Biden administration has upped the ante against Beijing – a bit, at least. It has also agreed to host Prime Minister Suga in April for the first visit to the White House by a head of state ever since Joe Biden took over. Suga will also be the first foreign leader to be hosted for dinner by Biden – a move aimed at winning back Tokyo’s trust, and reaffirming USA’s commitment to Japan.

US Secretary of Defence Lloyd Austin, meanwhile, is scheduled to visit India later this month. The Biden administration, by sending Austin to India – which by the way is a country being visited by him in the first tranche of official tours undertaken by the senior official, has sent a clear message that the United States stands with New Delhi. So, Biden is definitely making amends.

However, Prime Minister Modi and Prime Minister Suga do not want to take any chance with Biden – who after all, is a slow and forgetful man. While circumstances might be forcing him to toe the line of America’s allies, at heart, Biden remains loyal to the CCP – which is why he could suddenly be seen taking a pro-China stand at the all-important Quad meeting as well. The call between Suga and Modi comes as a final reminder to Joe Biden to embrace American allies, and abandon his fascination for China.

India and Japan, meanwhile, have shown that the reins of Quad lie with them. Also, they have put up a united front against Biden, and made it known to the septuagenarian that in order to fully earn back the trust of allies, the US President must not dilute the agenda of Quad. By doing so, India and Japan are ensuring that Biden continues with Donald Trump’s Indo Pacific pivot with a sense of established permanence.