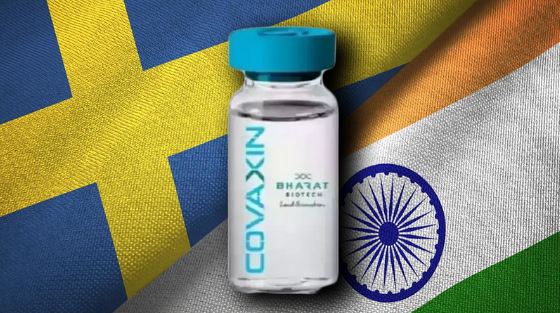 The use of AstraZeneca’s Covid-19 vaccine Covishield was briefly halted in Denmark, Norway, and Iceland on Thursday due to concerns about patients developing post-jab blood clots, although the manufacturer and Europe’s medicines watchdog insisted the vaccine was safe.

AstraZeneca’s failures with production, the EU’s tussle with Britain, and the failure of its vaccine led to its downfall, as it is getting suspended by European nations. AstraZeneca, the British-Swedish multinational company was on course to provide AstraZeneca’s Covishield vaccine to the whole world. The vaccines were being produced and distributed via India. Indian vaccines on the other hand, such as Bharat Biotech made Covaxin, have dominated the scene around the globe. Sweden’s next ‘dynamite’ moment was over even before it started and now it is smearing India by publishing papers and calling India an “electoral autocracy.”

Denmark was the first to confirm the suspension, citing “evidence of severe blood clots” among those who had received the vaccine, according to the country’s Health Authority. It emphasised that the decision was precautionary, and that “it has not been decided, at this time, that there is a connection between the vaccine and blood clots.” The European Medicines Agency (EMA) confirmed 22 cases of blood clots among more than three million people vaccinated in the European Economic Region as of March 9.

After a 49-year-old nurse died of “serious blood coagulation complications” days after receiving an anti-Covid injection, Austria announced on Monday that it had halted the use of a batch of AstraZeneca vaccines.

Four other European countries, including Estonia, Latvia, Lithuania, and Luxembourg, have also halted the use of vaccines from this batch, which was distributed to 17 European countries and included one million injections. Denmark, on the other hand, has discontinued the use of all of its AstraZeneca stock, as have Iceland and Norway in separate announcements on Thursday, citing similar concerns.

India on the other hand is supplying vaccines to every possible part of the world. India’s domestic vaccine, Covaxin, is destined to inoculate a major portion of the world. Currently, India is on course to supplying the Covaxin to India’s neighbours, and even France is looking to import the Indian vaccine.

Indian vaccine manufacturers are leading the crusade against Covid-19. Covaxin is more reliable and efficient with a latest report citing 81% efficacy. Moreover, the delivery outlay is on course accurate and the cost to procure Indian vaccines is very less comparatively.

India is triumphant in the vaccine market and it has hurt AstraZeneca’s Covisheild which has recently been suspended by many European countries. This has led to Sweden losing out on a chance of being of consequence again. Moreover as India is producing the Covisheild as well, the world has come to recognize India as the hub of vaccine manufacturing and Sweden has been sidelined. Thus, it has started to smear the Indian government and has called India, an “electoral autocracy.”

In the presence of Sweden’s Deputy Foreign Minister Robert Rydberg, the organization’s report was released on Wednesday. According to the report, India’s autocratisation process has “largely followed the usual trend for countries in the ‘Third Wave’ over the past ten years: a steady decline, with freedom of the media, academia, and civil society being curtailed first and to the greatest extent.”

This is a vile attempt by the Swedish government to smear India’s name at a time when the nation is leading the fight against Covid-19. The report reeks of bias and does not seem to take into account that India has been very efficient in tackling the Covid-19, even better than Sweden. Moreover, India’s vaccine outreach program has been lauded by the United Nations. Sweden is unable to grasp the fact that its moment to be consequential again since Alfred Bernhard Nobel invented ‘dynamite’ has come and gone and now it can do nothing about it.