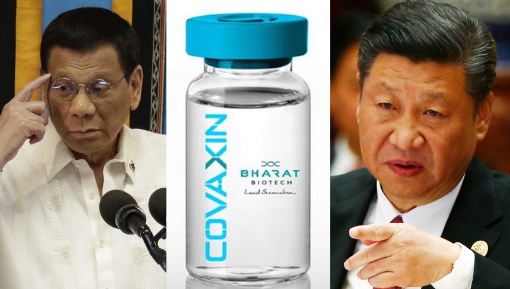 India’s vaccine diplomacy is gaining traction far and wide. Given the transparency in research and production, the far better efficacy percentage and no strings attached export makes the Indian vaccines a far better option than the shady and phoney Chinese Sinovac. This has come as a major embarrassment for Xi Jinping.

Read More- ‘You will face serious consequences,’ Philippines issues threat to China for its aggression in South China Sea

“Eight million is definitely achievable,” Kumaran told the Source. “We’re looking at anything upwards of 8 million, over a period of time. Over a period of a year to 18 months, we could even go up to 20 million doses. It really depends on the kind of agreement that we can reach.” He added, “The earlier we have these negotiations, the earlier we close the term sheet, the larger the number of vaccine doses that may be available.”

Chinese vaccine diplomacy early-on saw a very eager and accepting recipient in the Philippines. Philippine’s President Rodrigo Duterte had claimed in mid-2020 that he had requested China to send them the vaccines as soon as they are ready. Following this, the vaccines were launched in the Philippines amid much fanfare recently and increased the hopes for the nation which has been hit the worst by the Pandemic among South-East Asian countries. However, as the vaccines are made available, the enthusiasm started fading and people were rejecting them. Even the President had shied away from taking the vaccine, feeding to the rejection by the people.

At a time when Chinese vaccine diplomacy in the Philippines has turned out to be a total disaster, Manila has suddenly got itself interested in the Indian vaccine alternatives. All the fanfare and celebrations for the Chinese vaccine have faded away. As reality dawns, people are not willing to put their trusts in the Chinese vaccine.

The fact that Philippine’s President too has not taken the jab, adds to the fear. The questions about the efficacy, less research availability and charges of the corruption scandal have taken the shine away from the Chinese vaccine diplomacy in the Philippines as the vaccine stands rejected.

On the other hand for all the opposite reasons, the Indian vaccine has become a welcome alternative for the Island nation to go looking for. The Covaxin, which has reported an efficacy rate of 81%, was the fourth product to apply for emergency use approval in the Philippines – an issuance needed for it to be legally rolled out in the country. Aside from talks with Bharat Biotech, government officials and experts also flew to India this week in a bid to secure the anticipated 30 million doses of Novavax’s vaccine.

These developments of the Philippines shifting its focus from the Chinese vaccine and towards India, the world’s vaccine manufacturing powerhouse is part of a larger trend and a huge loss for the Chinese Vaccine diplomacy.