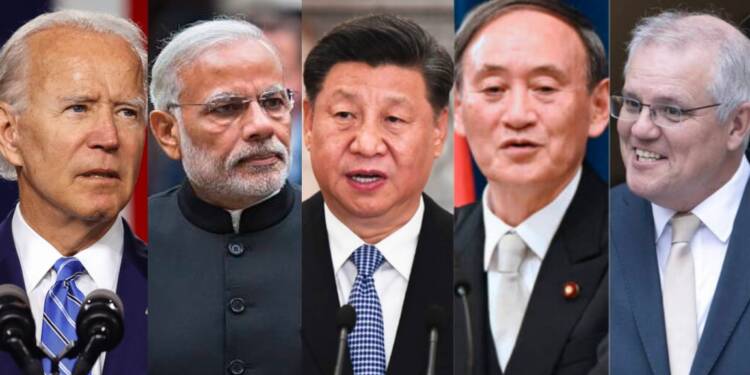 The first Quad Summit, held on Friday, announced an ambitious agreement to pool resources and capabilities of the four participant nations to carry out a billion doses of Covid-19 vaccines by 2022, as well as the creation of three working groups in the crucial areas of emerging technologies and climate change. It comes in the face of China that is seen as rapidly growing hostile against its neighbours, with territorial conflicts and coercive trade strategies.

According to a White House press release, Hyderabad-based Biological E Ltd will manufacture one billion doses of Covid-19 vaccines, including a single dose manufactured by Johnson & Johnson as part of the Quad Vaccine Partnership, announced on Friday. The note was released after the first meeting of the leaders of the Quad countries – the United States, India, Australia, and Japan.

The Quad Vaccine Partnership, in which the four countries will pool their strengths and expertise for the greater good, is being seen as the most significant and tangible outcome of the leaders’ meeting and will be a major jolt to China’s pharmaceutical industry.

“The United States, through the DFC (Development Finance Corporation), will work with Biological E Ltd., to finance increased capacity to support Biological E’s effort to produce at least 1 billion doses of COVID-19 vaccines by the end of 2022 with Stringent Regulatory Authorization (SRA) and/or World Health Organization (WHO) Emergency Use Listing (EUL), including the Johnson & Johnson vaccine,” the statement said.

“Japan, through JICA (Japan International Cooperation Agency), is in discussions to provide concessional yen loans for the Government of India to expand manufacturing for COVID-19 vaccines for export, with a priority on producing vaccines that have received authorization from WHO Emergency Use Listing (EUL) or Stringent Regulatory Authorities,” the US statement said.

“Quad partners will ensure expanded manufacturing will be exported for global benefit, to be procured through key multilateral initiatives, such as COVAX, that provide life-saving vaccines for low-income countries, and by countries in need,” it said.

Moreover, under the Quad initiative, New Delhi will manufacture Johnson & Johnson’s single-dose coronavirus vaccine. According to the Times of India, the project will be financed by Japan and the US, while Australia will use its logistics capability to ship the vaccines to Southeast Asia and Pacific countries.

Besides, US vaccine manufacturer Pfizer is also eyeing for India to produce Indian vaccines. Pfizer Inc has told the Indian government that it wants to produce its coronavirus vaccine locally if assured of faster regulatory clearance and freedom on pricing and exports, two sources with direct knowledge of the matter told Reuters.

The virtual summit, which was hosted by US President Joe Biden and attended by Indian Prime Minister Narendra Modi, Australian Prime Minister Scott Morrison, and Japanese Prime Minister Yoshihide Suga, discussed common challenges in the Indo-Pacific region. They spoke about a variety of topics, including China’s assertive conduct, and the Quad pledged to promote a free and open rules-based order to advance peace and development in the region and beyond.

The Indian Prime Minister set the tone of the meeting with his opening remarks. He said, “Our agenda today, covering areas like vaccines, climate change and emerging technologies, make the Quad a force for global good. I see this positive vision as an extension of India’s ancient philosophy of Vasudeva Kutumbhakum, which regards the world as one family.”

He also emphasised the Quad’s importance and growth and said, “Today’s summit meeting shows that the Quad has come of age. It will now remain an important pillar of stability in the region.”

The Quad Summit was also Biden’s first plurilateral engagement since taking office in January, and he stated that a free and open Indo-Pacific was critical to all four countries’ futures. He went on to say that the Quad was renewing its pledge to “ensure that our region is governed by international law, committed to upholding universal values, and free of coercion.”

India already has had an extraordinary rate of manufacturing, development and production. It was already outpacing China. With Quad behind it, India can put out more vaccines at an incredible rate. Moreover, the quality of vaccines India manufactures is already exceedingly better than its Chinese counterparts and now with Johnson & Johnson set to manufacture its vaccine in India no country in its right mind will choose Chinese vaccines, which will ultimately lead to the dismantling of China’s pharmaceutical industry.