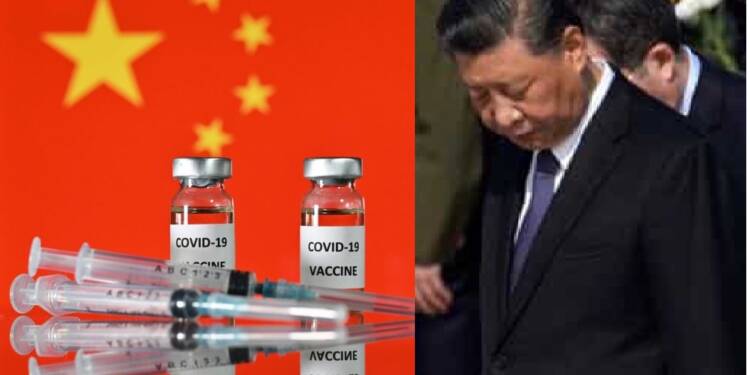 Xi Jinping had hoped that Chinese vaccine would help China to dominate the world. But India edged China out. Indian made vaccines proved to be more efficient and trustworthy than their Chinese counterparts. While countries rejected Chinese vaccines, Indian vaccines and Indian manufactured vaccines were welcomed by them.

China’s vaccine push has failed as its vaccines failed to display efficacy. As a result, only Pakistan had opted for Chinese vaccines, mostly because it trusts the paper dragon more than India. The World Health Organisation which worked hand in glove with China’s President Xi Jinping to unleash the pandemic upon the world, has approved only five Chinese vaccines for export compared to 47 vaccines from India.

Chinese vaccines have failed to live up to Xi Jinping’s expectations. The efficacy numbers of the Chinese vaccines in Brazil reached just a lowly 50%. The officials at Sinovac had then asked Brazilian researchers to delay releasing precise vaccine efficiency data for up to 15 days, on the pretext of consolidating data from global trials.

Even under pressure from China and unsure about the foreign policy shift that will take place in the United States, the efficacy in Indonesian trials was found to be 65.3%. Thus, it is willing to placate China by buying its vaccines en-mass, so that any change in US foreign policy may not leave the Indonesians in a fix.

Read More: The reason why Indonesia bought the Chinese vaccine despite its 60 odd per cent efficacy

On other-hand, Vietnam remains the only ASEAN state which has rejected the Chinese vaccine altogether.

China’s aggressive diplomatic tactics have infuriated the South Asian nations. The political conditions attached to the export of Chinese vaccines has been rejected by India’s neighbours and along with China’s vaccines themselves.

Moreover, Shanghai-based expert Tao Lina exposed the shocking risks associated with China’s Sinopharm vaccine. He described the Chinese vaccine as the “most unsafe vaccine in the world,” after it was found that Sinopharm vaccine has as many as 73 side effects.

These pieces of evidence and instances have caused great pain to Xi Jinping’s plan to dominate the world via vaccine diplomacy. Besides, at the same time, India’s vaccine diplomacy has been hailed.

United Nations Secretary-General Antonio Guterres called for India to play an important role in the global vaccination campaign on Thursday and recognised India’s vaccine development potential the “best asset” the world has.

India, unlike China, has aimed to supply Africa with 1 crore or 10 million doses and 10 lakh doses for health workers of the United Nations under the COVAX facility of GAVI (Global Alliance for Vaccines and Immunization).

Moreover, apart from gifts, New Delhi has been exporting vaccines on a commercial level too. On a commercial level, the export has taken place for Brazil, Morocco and Bangladesh. Further supplies to countries on commercial bases are likely to take place to Saudi Arabia, South Africa, Canada Mongolia and other countries.

With such an extraordinary rate of manufacturing development and production India is helping the world to vaccinate against the Chinese Virus. China on the other hand has produced low efficacy vaccines, helped spread the virus and is now forcing small states to make use of its under-par vaccines. China has led support to the WHO’s COVAX initiative, despite that none of its vaccines made the cut.

With such failures in its vaccine, China was unable to attract buyers and states alike. Xi Jinping plans for vaccine outreach, which would have, undeniably be laced with political conditions have failed to make a head start. The vaccines have been criticised for their poor efficacy in Brazil and other states. Even the WHO has refused to provide these vaccines authorization for their COVAX program. The pandemic was an opportunity for China to expand its soft power coercively but China’s pharmaceutical industry has failed it massively.