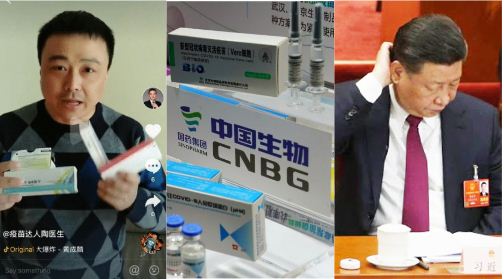 China’s dark vaccine secrets are now out in the open. As per Taiwan News, a Shanghai-based vaccine expert Tao Lina has exposed the shocking risks associated with China’s Sinopharm vaccine. Tao has been working at the Shanghai Center for Disease Control and Prevention (SCDC) for the past 20 years. He has described the Chinese vaccine as the “most unsafe vaccine in the world,” after it was found to be having as many as 73 side effects.

Tao exposed China’s dangerous vaccine on his Weibo page. And now, the Chinese authorities have taken cognizance of the embarrassing situation. Tao exposed the dangerous Chinese vaccine before the world, but now the Chinese Communist dispensation has deleted his Weibo account. And given how China works, it is entirely possible that the Chinese government also enforces a mysterious disappearance.

The state-run firm claims that its vaccine has a success rate of 79.34 per cent. However, as per the Hong Kong-based Ming Pao newspaper, Tao uploaded a digital version of the vaccine’s instruction manual on his Weibo page.

The Shanghai-based vaccine expert said, “I took in a long cold breath, and counted the conditions listed in the ‘adverse reactions’ column.” Tao was shocked to find as many as 73 local/systemic side-effects associated with the Chinese vaccine.

Some of the side-effects are routine like pain in the injection site and headache. But there are severe adverse effects also, including high blood pressure, loss of vision, loss of taste, delayed menstruation, and urinary incontinence. Also, these listed severe effects are “more likely to occur.”

Every vaccine has a few side-effects, but 73 adverse effects are just way over the top. Tao also asserted that the number of adverse reactions is “absolutely unprecedented.” He even mocked the user manual as “one long disclaimer.”

Also, Tao alleged that since the 73 side effects are listed expressly, those who actually suffer from such adverse reactions would not be able to claim compensation against the manufacturer.

The Chinese vaccine actually seems more harmful than the Chinese virus itself. The number of adverse reactions and their severity could by itself turn fatal. In fact, if we connect the dots, it can be understood why Beijing has decided to inoculate its working population before the elderly.

One factor is that China doesn’t care for its elderly. So, it wouldn’t want to waste its vaccine shots on the elderly population. Also, China wants to keep its vaccine success rate high, so it would prefer excluding the elderly and those suffering from comorbidities.

But more importantly, if the Chinese vaccines have adverse side effects, then it might be very unsafe to administer them to the elderly population. Therefore, Chinese authorities may have decided to let the elderly remain uninoculated.

Tao Lina has thus done the world a big favour, by warning it about the inherent risks associated with Chinese vaccines. However, his humanism may have come at a huge risk to personal safety, given that the Communist authorities in China crack down on anyone who exposes their wrongdoings.