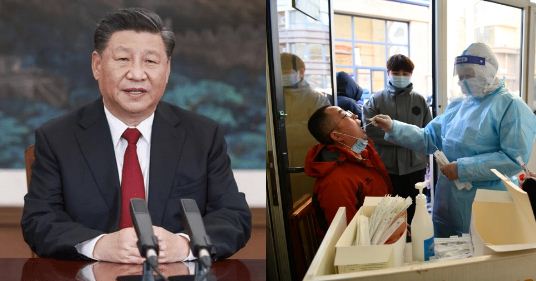 China’s Coronavirus troubles are getting exposed. The official Chinese statistics claim that the Communist nation has just 87,331 recorded cases, but the ground situation tells a different story. The Xi Jinping administration has put an entire city of 10.39 million people under complete lockdown to “curb infection”. At the same time, China denied entry to a WHO investigation team, as a part of its strategy to keep the world in dark about its COVID-19 situation.

Chinese state-owned newspaper, China Daily reported, “Shijiazhuang goes on lockdown to curb infection.” Shijiazhuang is the largest city in North China’s Hebei province. And from this, we can assume that the Wuhan virus outbreak has gone out of control in China. For the past several months, China was arguing that it has curbed the COVID-19 infection and that its economy was back on track. However, Shijiazhuang lockdown suggests otherwise.

The Chinese state media also reported, “The city has also suspended major transport links with outside areas, including long-distance buses and expressways and banned gatherings. People are urged to cancel or delay weddings. Passengers taking trains or flights must have a negative nucleic acid test result within three days of departure.”

China Daily further claimed that citywide testing for the 10.39 million Shijiazhuang began on Wednesday. Thousands of medical workers from other cities are also being mobilised in the city under lockdown, as local authorities fail to control the spread of COVID-19 infection.

Meanwhile, Chinese authorities seem to be still underreporting the latest wave of COVID-19 cases emerging in Hebei. Local authorities claim that they recorded 20 locally transmitted cases along with 64 new asymptomatic cases. Yet, the imposition of a total lockdown over millions hints at a much larger spike in cases.

China itself has been desperate to open up and revive economic activity. If it still has to impose a lockdown, then it really implies that the Chinese government cannot manage the Wuhan virus.

The lockdown comes at a time when Beijing has made a fresh bid to deny entry to a WHO probe team for investigating the Wuhan virus origins. Two members of the WHO who were already on their way to visit Wuhan- the city where Coronavirus originated, were denied entry to China.

The WHO said that there were issues with visa clearances, while Chinese Foreign Ministry spokesperson Hua Chunying told BBC that “there might be some misunderstanding” and “there’s no need to read too much into it”.

This is what China actually wants from the world- don’t read into anything. China may have to enforce a total lockdown upon millions of people, or it may be failing to manufacture a safe vaccine for its 1.39 billion citizens, but don’t read too much into it. Yet, we cannot help but notice how China’s Coronavirus troubles are getting exposed all over again, and this time Beijing is failing to downplay its virus problem.