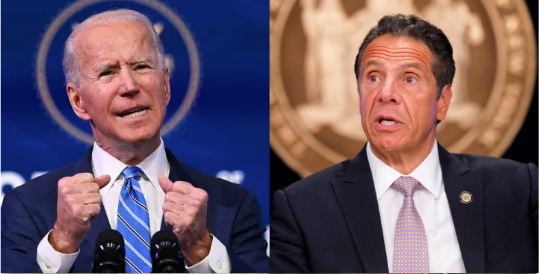 The allegations of sexual misconduct and harassment against New York Governor Andrew Cuomo, who until recently, was a liberal media darling, have imperilled the reputation of the US Democratic Party, which in any case is suffering from an image crisis like never before. The awe-inspiring political party of America is nothing more than a coterie of corrupt, crass and serial sexual harassers, who simply refuse to take responsibility for their dastardly acts. Such is the crisis of the Democratic Party at this point, however, that it can neither stand by Andrew Cuomo and abet his crimes nor can it be seen shielding the man. Calling for the New York Governor’s resignation might just open a pandora’s box which the Democratic Party wants to be kept closed.

In line with the same, Joe Biden, who has somehow become the President of the United States, broke his silence on the various scandals surrounding his long-time friend Andrew Cuomo. Speaking to reporters at an unscheduled Q&A session on Sunday, Biden neither condemned Andrew Cuomo nor did he echo calls for his resignation. He, however, said that the investigations must be completed into the matter, particularly relating to allegations of sexual misconduct against Cuomo.  When asked whether he agreed with other Democrats calling for Cuomo’s immediate resignation, Biden said plainly, “I think the investigation is underway and we should see what it brings us.”

It is quite intriguing how outrage against Andrew Cuomo and calls for his resignation are limited to the New York state itself. It is increasingly being believed that the outrage among New York Democrats is not a sign of their humanism or sense of justice for the victims of the sexual deviant, but because of vested interests – which may very well include them eyeing the top office in the state for themselves. But that is how politics works. Our concern is not what the liberal-loonies plan to do after ousting Cuomo from office. What is of interest, however, is the stoic silence being maintained by Democrats in other parts of the country.

The silence, rest assured, is strategic in nature. Make no mistake, Democrats from all over the US rising up in arms against Cuomo will likely get the New York Governor to quit office. What it will also lead to, though, is the setting of a stringent precedent, which may threaten Democrat strangleholds all across America. Democrat Governors are not holy cows. They all have secrets to hide – almost all of which could threaten their political careers if someone were to pull the cat out of the bag. Already, TFI has reported how California’s Democrat Governor Gavin Newsom is becoming highly unpopular in the blue-citadel.

From Gavin Newsom’s decision to enact the first state-wide stay-at-home order in the country about a year ago and to the later restrictive orders that he put in place during the winter holiday months as the cases increased, pushing California’s hospital and ICU capacities to their limits; his Covid-19 response is increasingly being brought under the lens. Californians are not happy to be among the only people of the country whose freedoms have been curbed to a large extent under the premise of the ‘pandemic’.

Read more: There could be more Cuomos in Democrat-controlled states who may have killed elderlies in nursing homes

It is also being believed that the California Governor, like his counterpart in New York, might have played a role in the underreporting of both Covid-cases and related deaths. The Democratic Party feels that if it were to start taking action against both these governors for their misdeeds, they would practically be left with no governors in the country, as almost all of them have something to hide. Whether it be sexual misconduct with which such governors victimised those in a position of comparative weakness, or allegations of such leaders being corrupt, or worse, found to be covering up crimes – the blue party wants to ignore it all.

Taking disciplinary action against Andrew Cuomo or the party’s top leadership calling upon him to demit office will have devastating consequences for Democrat Governors across the country. It will initiate a string of scandals tumbling out of safe closets, resulting in the liberal party being exposed for what it really is. For this very reason, the strategic silence and carefully crafted statement-making in the Cuomo case are being led by no less than President Joe Biden and House Speaker Nancy Pelosi.