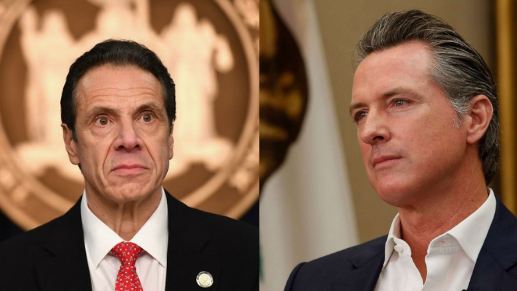 After New York Governor Cuomo, it’s now California Governor Gavin Newsom’s turn to be exposed as Democrats scramble to save their controversial leaders.

At a time when the Democrats were praying that Governor Cuomo is the first and the last to be exposed, the mounting criticism of the California Governor Gavin Newsom must have come as a nightmare to the Democrats. California under the Democrats was already turning into a disaster, be it the increasing number of homeless people, increase in drug abuse, big companies moving out of the state among others. But the plight of the people has exacerbated since the arrival of the pandemic.

From Gavin Newsom’s decision to enact the first statewide stay-at-home order in the country about a year ago and to the later restrictive orders that he put in place during the winter holiday months as the cases increased pushed California’s hospital and ICU capacities to their limits.

Since then, he has become really unpopular among the people residing in California. It comes after the New York Governor Cuomo’s case which seemed to have opened a pandora’s box which can engulf the Democrat Governors in other states too. It would not be surprising if the California governor and others too are found to have done some foul play at hiding the COVID-19 numbers in their states.

The situation in California was best encapsulated by former acting Director of National Intelligence Ric Grenell. He said, “It’s a sad truth. If you’ve been to California lately, you will see homeless people everywhere, you will see rolling blackouts, you will see the fact that we’re being asked to conserve water even though we live on the ocean.”

He added, “Look, I have friends in my community who campaigned for Gavin Newsom, Democrats who have now become the block captains for the recall effort. This is about watching California slip to the last place. And in the post-COVID world, you can’t go to church. You can’t go to school. We’re not eating indoors. Think about that. We’re the last state where you cannot eat inside. This is a real disaster for many Californians and California should be the leader of the country. This is a great state [California] with incredible beauty. But our working-class middle American families here in California are up against a system that is controlled by very far-left progressive Democrats, and it’s strangling them.”

TFI had earlier reported, that in the case of Andrew Cuomo, leaving the New York Democrats, all others throughout the USA are maintaining a strategic silence. It seems as if they all have many things to hide and feel threatened by that, they are willing to stay low and bide the time, till the public outcry against the allegations on Cuomo fizzles out slowly. This argument is strengthened by the fact that the top Democrat leadership too is not taking any action. They do not want the actions against Cuomo to become a precedent and open the flood gates for the other governors and Democrats to be taken to task.

Read more: There could be more Cuomos in Democrat-controlled states who may have killed elderlies in nursing homes.

It looks as if the Democrats cannot take it anymore and have come to the rescue of the California Governor. In line with this, Sanders, I-Vt., tweeted his criticisms of the recall movement on Monday.

“Right-wing Republicans in California are trying to recall Gavin Newsom for the crime of telling people to wear masks and for listening to scientists during COVID,” Sanders tweeted. “Extremist Republicans have done enough to undermine democracy already. We must all unite to oppose the recall in California.”

Right-wing Republicans in CA are trying to recall @GavinNewsom for the crime of telling people to wear masks and for listening to scientists during COVID. Extremist Republicans have done enough to undermine democracy already. We must all unite to oppose the recall in California.

The Democrats are afraid that these actions, which are beginning in New York and California, are going to escalate and may even bring out the criminal negligence that the Democrats during the pandemic which led to undercounting the COVID cases. The Capital creators and big companies are already leaving California, the California Governor’s actions have even made sure that the middle-income families leave the state.