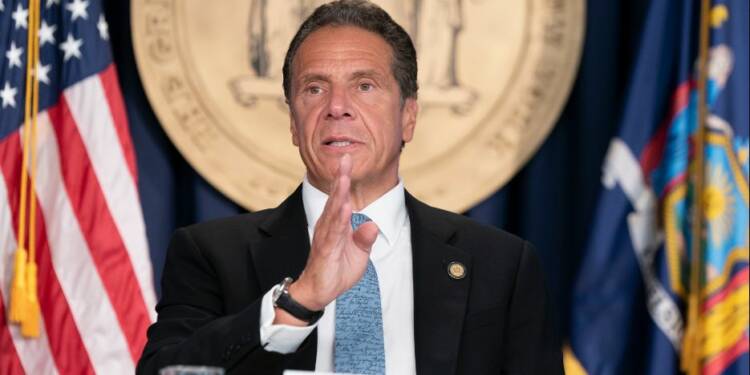 After unimpressively serving as Governor of New York state for ten years, Andrew Cuomo’s period of glory arrived last year along with the Covid-19 pandemic, which saw mainstream and liberal media going all gaga over him and his seemingly outstanding Covid-response. That fanfare has now subsided, and Andrew Cuomo is no longer the darling of liberal media, or for that matter, of even his Democrat colleagues. Cuomo’s glory was short-lived, and currently – the man who has been exposed as a sexual deviant, is going through the most tumultuous phase of his political life. Here’s TFI’s account of the rise and fall of New York’s Democrat Governor – Andrew Cuomo.

Cuomo took the oath as New York Governor on January 1, 2011. At heart a socialist, Cuomo has worked to achieve many liberal goals in the past ten years. From enacting a same-sex marriage bill with bipartisan support to expanding abortion rights and access for women, and also passing stricter gun-control measures – Andrew Cuomo has always been the blue-eyed-boy of America’s left-liberal coterie with his policies.

Cuomo also legalised marijuana for medical use, an ambiguous term that is as good as throwing open cannabis on the streets without anyone fearing the law getting back to them. Cuomo became an instant hit among first-time voters and those who knew little about the seriousness of politics.

As is common for Democrats, Cuomo too, has always had a thing for optics. In his ten years in office as the Governor, the man has never missed an opportunity to market himself as a brand that will one day most definitely be seen on the banners of a presidential campaign.

Come 2020, and the subsequent Covid-induced lockdowns, Andrew Cuomo began to be projected in the US as a political star like no other, who more than anyone else, deserved to be running for the White House. In fact, it was almost a given fact that after Joe Biden in 2024, the Democrat Party would have Andrew Cuomo running on their behalf for the presidency.

2020 was heavenly for Andrew Cuomo. On a daily basis, he would go on various news channels and have pleasant soft-talk with the anchors, who just could not help but be overawed by the man’s charisma. Leading the pack of hosts who simply drooled over the Governor was his own brother – Chris Cuomo from CNN.

As the duo would shift from political to family talk at regular intervals, leftists could not help but fall in love with them. And then, to further indulge in a PR campaign like no other, Andrew Cuomo became a hit for his press briefings. However, soon, hell began befalling the Cuomos, and Andrew particularly is now regretting the day he stepped foot into politics.

Mainstream media has always looked the other way when it comes to the many disasters which Andrew Cuomo has been responsible for in New York. Among them, the state’s subway crisis shines brighter than the others.

Under Cuomo, the Metropolitan Transportation Authority repeatedly diverted tax revenues earmarked for the subways, paid for services that there was no need for and spent on subway projects that did not boost service or reliability. As a result, the MTA was saddled with debt and could not undertake investments into overhauling outdated and inefficient subway infrastructure. Cuomo also insisted on carrying forward projects to which the MTA did not attach much priority. This was in 2017.

Three years later, in 2020, Andrew Cuomo was having a heavenly time in office. Friendly media doing his bidding, Democrats projecting him as the next President, liberals swooning over him and Trump despising him – all was going splendidly for Cuomo. Then 2021 happened, and Andrew Cuomo’s exit from politics is no longer a question of ifs, rather that of when.

An investigation by the New York state attorney general Letitia James found that the Cuomo administration undercounted Covid-19-related deaths at nursing homes by as much as 50 per cent. On February 12, Melissa DeRosa, a top aide to Cuomo, said in a call with state Democratic leaders that the Cuomo administration intentionally delayed the release of data pertaining to deaths from Covid-19 within nursing homes in fear it would’ve triggered a potential federal investigation by the Department of Justice and given an advantage to his political opponents.

Andrew Cuomo’s boat soon began rocking, but the storm was yet to come. By now, Chris and Andrew’s conversations on CNN ceased, and the Governor instead began being covered for his misdeeds. Chris Cuomo, in one of his conversations with the Governor last year, called him the “best politician in the country” for whom he could “never be objective (in reportage)”.

On Monday last, however, he said, “Obviously, I’m aware of what’s going on with my brother. And, obviously, I cannot cover it, because he is my brother. Now, of course, CNN has to cover it. They have covered it extensively. And they will continue to do so. I have always cared very deeply about these issues, and profoundly so. I just wanted to tell you that. There’s a lot of news going on that matters also. So, let’s get after that.” However, why did Chris Cuomo say this, and attempted to cover up for his brother by saying that a lot of other news matter too?

Well, as it turns out, Andrew Cuomo has been exposed as a sexual predator!

The New York Governor, who not until very long ago had dreams of occupying the Oval Office, suddenly finds his career in jeopardy, after having been accused of sexual misconduct by no less than three different women. Charlotte Bennett, a 25-year-old former aide to the governor, accused him of sexually harassing her last year, telling the New York Times that Cuomo had asked her about her sex life and whether she had ever had sex with older men. She became the second woman to come out in the open about her being victimised by the sexual predations of Andrew Cuomo.

Prior to Bennett, another former administration aide, Lindsey Boylan shared her terrifying account, in which she stated how Cuomo had a “crush” on her. Lindsey said that the Governor went “out of his way to touch me on my lower back, arms and legs.” In October 2017, during a flight back from an event in Western New York, Boylan said Cuomo told her they should “play strip poker.” And in 2018, she said that the Governor gave her an unsolicited kiss after a one-on-one meeting in his Manhattan office.

But that is not where the sexual drive of Andrew Cuomo – until recently the darling of American liberals comes to an end. In fact, a third victim – Anna Ruch, 33, said she encountered Cuomo at a wedding they attended in September 2019 at which they began talking. Soon, Cuomo put his hand on her bare lower back, she said. When she removed his hand with her own, the governor remarked that she seemed “aggressive” and placed his hands on her cheeks and asked if he could kiss her.

Read more: Liberal darling and Presidential hopeful Cuomo falls from the sky to possibly spend a long sentence in jail

The allegations of sexual misconduct have stormed Andrew Cuomo’s calm and glorious life, and imperilled his future political plans, as bipartisan support in the US seeking the man’s resignation as New York Governor grows. To vent out his frustration, the man and his office have taken to threatening Democrats who speak out against him. Cuomo has been on a mission to destroy the lives of those speaking against him.

The man, who on several occasion has made it a point to wear see-through shirts in order for his nipple-piercings to be noticed, suddenly finds his career obliterated just when it was beginning to flourish. The New York Attorney General has taken up investigations against Cuomo, and will soon hire a private law firm to deal with the case. Needless to say, the fall of Andrew Cuomo has been just as steep as his rise was.

You got to be in Texas to feel like a Texan: Even Democrats in Texas are opposed to Biden’s radical policies