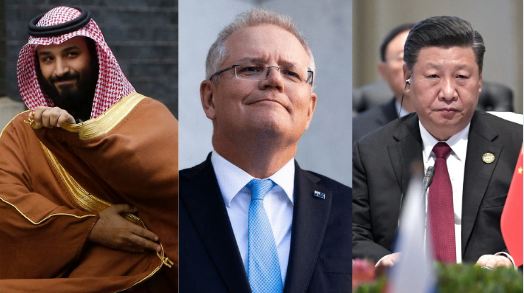 China’s year-long tariff war against Australia seems to bear no fruit as Australian exporters are rapidly breaking into new markets worldwide. After last year’s geopolitical spat between Australia and China, the latter announced a whopping 80 per cent import duty on Australian barley. However, the move has proven to be far less than enough to make Australia succumb to China’s pressure. The sanctions-hit barley exporters are now looking forward to set foot into the world’s major market for food grains- Saudi Arabia.

Saudi Arabia and China are the world’s top barley importers prompting Australian exporters to turn to Saudi for urgent shipment of their bumper harvest this year. Beating fierce competition from other suppliers, Australian barley is all set to make its way to the Saudi market this season. As per a Business times report, Australia appears likely to provide the bulk of the purchase of 660,000 tons, pushing out traditional suppliers from the European Union and the Black Sea.

The kingdom uses barley as an animal feed for sheep, camels and goats providing a golden opportunity to Australian exporters to introduce their produce in one of the world’s most promising markets. Previously, China would import a lion’s share of Australian barley. In 2018-19, China imported more than half of Australia’s total barley exports on its alone. However, things changed last year when Australia demanded an independent inquiry into Covid-19’s origin. A rattled China went on a spree of announcing import restrictions to punish Australia.  As of the current fiscal year, China has announced major import restrictions on Timber, Wine, Coal, Cotton and Barley among others.

The surge in global crop prices had made Saudi importers look for other alternatives of food grains. Australia’s barley has emerged as an attractive substitute for corn and other food grains imported from other parts of the world. As a result of this, Australia has not only managed to ease the pressure off of its barley exporters but also has effectively moved on from its over-dependence on China.

Last year, as reported by TFI, India also came forward to help Australia deal with China’s tariff war. After China announced major restrictions on Australia’s barley in May 2020, India rushed to help Aussie traders by hinting at the possibility of importing 5 lakh tones of malt barley in the same month. In February, the Indian government removed the need to use methyl bromide on malt barley, opening their doors to Australia’s exports.

Read More: As WHO gives the clean chit to China, Australian member of the investigative team strikes a discordant note

China’s tariff war against Australia has not only backfired gloriously and contributed to loads of problems at home, but also has forced Australia to do away with its economic over-dependence on the coercive communist nation. The new Australia, under Scott Morrison, is taking the mighty dragon head-on and is leaving no stone unturned in its attempt to turn its supply chains China-free. The rocky relationship with China has actually turned out to be a boon for Australia’s economy as the country has started looking for better alternative markets worldwide. It was only due to Morrison’s terrific economic policies that Australia bounced out of an economic recession in December last year. The country’s economy has grown by 3.3 per cent beating all projections made worldwide and thus drubbing the myth of China’s economic warfare.