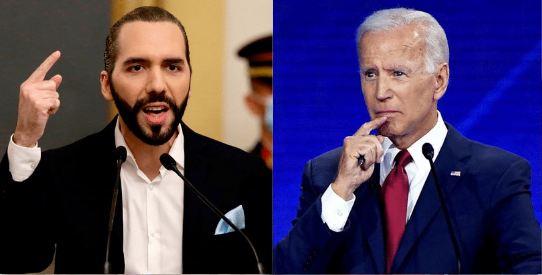 Targeting US President Joe Biden for taking a volta face on Trump’s air-tight border infiltration control measures for illegal immigrants by opening up the border gates and granting aliens the residency, President of El Salvador Nayib Bukele called the ‘new-liberal practice’ as ‘immoral’ and causing overall destruction to both sides.

The small Central American country of El Salvador is facing the modern-day phenomenon of ‘brain drain’ on an excessive scale with the potential working class that can help build the country, forfeiting the opportunity to do so, and moving northward. And while the southern states of America have their own problems with illegal immigration and aliens, Nayib argued that the immigration crisis was hurting his country as much as America.

Warning that mass immigration was “not profitable” for either country involved, Bukele in an interview with Fox News said, “First, it is immoral — you need to provide for your people. But, you also have an economic issue. If you send hardworking people and talented people and people who want to risk it just to go to work, you want to keep them here because those will be the drivers of your economy. You don’t want them there so that they can send a remittance, which would be a small portion of what they would earn and produce; you want them to produce here.”

Nayib admitted that his country was behind in providing economic opportunity as well as security to its citizens which caused the ‘brain drain’ — but by opening the borders for all immigrants, the 46th President of America had intentionally given a free invitation to such people to leave their country and move to the North.

Read more: Five reasons why the immigration crisis in America is going to bury Joe Biden and help Donald Trump in 2024

Nayib further said that instead of exporting goods and services, by exporting potential workers, a country like El Salvador will end up basing part of its economy on the “remittances” sent by immigrants who become employed in the United States back to their family in Latin America.

Nayib finally said, “The best thing for both of us is to keep our people here and provide for our people right here in our country. That is what people here want.”

As reported by TFI previously, when one simply opens the country’s borders, projects himself and his administration as a messiah of illegal immigrants and works to grant them asylum en masse, the number of border crossings will only expectedly surge. But while Biden swims in the fickle accolades of the liberal brigade, there is a dark underbelly to the entire issue which is not being addressed by the White House.

With the Biden administration downplaying the crisis, and not even recognising the frightening scenes at America’s borders as a ‘crisis’, it is the common Americans and the economy of a country like El Salvador, which are spiralling into tatters.

By voicing his concerns which largely would have gone unnoticed, Nayib has opened up an intriguing conversation of the effects of illegal immigration and how it not only affects the country those aliens are immigrating to but the country they are migrating from.

If Biden had kept Trump’s policy in place, a new, emerging leader like Nayib, who is slowly building his country back, would have had the time in his hand to use the manpower of common Salvadorians to plug the gaps of ‘lack of economic opportunity’ and ‘security’ – which in turn would have helped keep the immigration rate in check.

However, with no such check in place, Biden is destroying the future of ordinary Americans who will be fighting for jobs with the Salvadorians and simultaneously the central American country, which is losing out on its precious human capital.