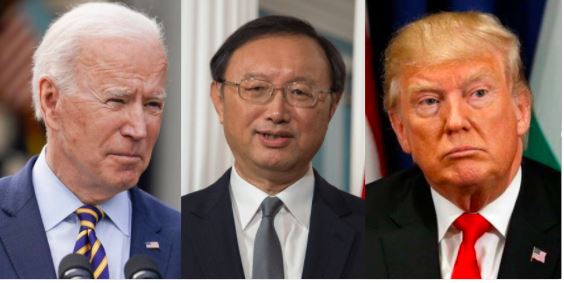 It is often said that the political leaders are the representation of the country. And when it comes to the relations among different states, the chemistry among the leaders is a very good way to understand where the bilateral relations are headed. The best comparative example available in recent history is the way in which Yang Jiechi, Director of the Central Foreign Affairs Commission Office of China was dealing with former US Secretary of State Mike Pompeo and how he is acting with the current Secretary of State Antony Blinken.

The comparison is apt and explains the difference between the two administrations. While Yang Jiechi was acting well behaved in front of Mike Pompeo even though the USA was giving it a very tough time. The USA under Donald Trump was taking on the CCP both economically and geopolitically, but at the meeting, Yang was well behaved and termed the conversation constructive.

However, the latest meeting between the US secretary of State Antony Blinken and the Chinese delegation, which was held in Alaska saw a very different Yang Jiechi. Clips from the talks between the two sides have now flooded social media, and the US can be seen being thrashed left, right and centre by Chinese representatives Yang Jiechi and Wang Yi.

A meek US delegation watched on, as the Communists charge at them with unusually long monologues. What is worse is the fact that the Biden administration seems to have taken to responding to Chinese aggression after the talks are done and dusted! Unlike former President Trump, whose very body language and rhetoric was sufficient to scare China off, and who was personified in his administration’s representation of the US, Joe Biden has naturally been perceived as a weak and feeble head of state with an equally meek administration.

Make no mistake: the first round of negotiations between the US and China has been a catastrophe for the former, which had the paper dragon by the throat until recently. China, on the other hand, snatched the Biden administration by the collar and blasted them during their officials’ endless monologues this time around. To be fair, Secretary of State Antony Blinken attempted to raise the stakes against his Chinese counterparts, but he did so in an overly polite, soft-spoken, and lenient manner. When it came to matters like Taiwan, Hong Kong, Xinjiang, and the Indo-Pacific as a whole, the lack of powerful and stinging words served as a cue for China to thrash its American counterparts.

The fact that the Chinese delegation was purring like a kitty a year ago, during the Trump administration goes a long way to tell whose foreign policy was hurting China more. The then US Secretary of State Michael Pompeo met his Chinese counterpart, Yang Jiechi last year and Yang acted all well behaved then. The Chinese foreign ministry called the talks “constructive” and said the two diplomats had agreed to implement an earlier consensus agreed to by President Donald Trump and Chinese President Xi Jinping.

However, the tone and tempo both have changed since. This is the most obvious signal that the Chinese Communist Party finds itself in a more dominating position in the face of a week and meek Biden administration. This is also a lesson for the international community to realise that the USA is not going to be the cohesive force anymore and going ahead they should and must come together.

Biden has been consulting Obama. That means Obamacare, Iran nuclear deal and war in Syria are just around the corner