Israel election result is hanging but one thing is very clear, it is going to get a very very right-wing govt 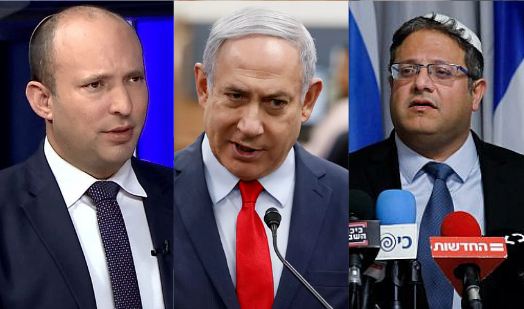 After failing to emerge as a definite winner in Tuesday’s exit polls, Benjamin Netanyahu now faces the possibility of forming a coalition government with hardline religious groups. While the result still hangs in a balance a right-wing government is certainly forming in Israel.

In Israel’s fourth election in two years, exit polls indicate that Prime Minister Benjamin Netanyahu’s Likud Party has gained the most seats, but it will fall short of the 61 seats required for a majority. It means that in coalition negotiations, Netanyahu will have to court hard-right Religious Zionism and probably newcomer Islamist movement Ra’am, among others, in what is expected to be a complicated and lengthy process.

After three inconclusive elections since 2019, Netanyahu, Israel’s longest-serving prime minister with 12 years in office, had hoped that Tuesday’s election would finally allow him to unite a stable right-wing coalition behind him. According to the exit polls, the right-wing Likud party of Netanyahu secured the most seats, raising his chances of forming a coalition with a majority in the 120-seat Knesset.

An alliance with Religious Zionism will be divisive because it involves the far-right Otzma Yehudit – “Jewish Power” in Hebrew – whose leader has expressed support for a mass murderer who killed 29 Palestinians in the early 1990s.

Itamar Ben Gvir, whose party is due to make its first appearance in the Israeli parliament, is known for having an image of religious extremist, Baruch Goldstein, on display in his living room. He has also called for Arab-Israeli people who are not “loyal to Israel” to be deported. Ben Gvir has not yet stated whether he is ready to collaborate with Netanyahu. That being said, his party’s Religious Zionism movement is expected to gain about seven seats, which could be crucial in forming a coalition.

Netanyahu campaigned on his reputation as a hawkish guarantor of Israeli security who, late last year, scored a diplomatic coup by establishing ties with several Arab states. He also had a world-leading coronavirus vaccination programme that has vaccinated nearly half of Israel’s nine million residents, a rate that most of the world admires under his belt.

But Netanyahu is likely to fall short of majority once again, despite the fact that his Likud party received more than 24% of the vote and easily defeated its nearest competitor, the moderate Yesh Atid, which received about 14% in the exit polls.

Meanwhile, Yamina chief Naftali Bennett is expected to win seven seats, a lower number than he had hoped for but one that could help him keep the Likud party afloat. Despite the ambiguity of the exit polls, Netanyahu remains Israel’s most successful right-wing leader by a large margin.

Netanyahu celebrated a “massive victory for the right” on election night, saying he would welcome all comers to a potential coalition. He told supporters, “I will reach out to all elected leaders who share our values.” “I’m not going to exclude anybody.”

According to political analyst Yaron Dekel, this meant Netanyahu would now be on the lookout for individual defectors from the opposition bloc. “From this night onwards, I’m going to start looking for deserters from other blocs to add them to my bloc,” Dekel effectively proclaimed.

Every other past and present challenges of Netanyahu have fallen way short of Netanyahu’s popularity. However, the Likud party’s inability to secure a majority means that a coalition would be necessary for Netanyahu to stay in power. This was Israel’s 4th election in two years and as such Netanyahu could look to end this election cycle by forming the most right-wing government with like-minded right-wing groups.