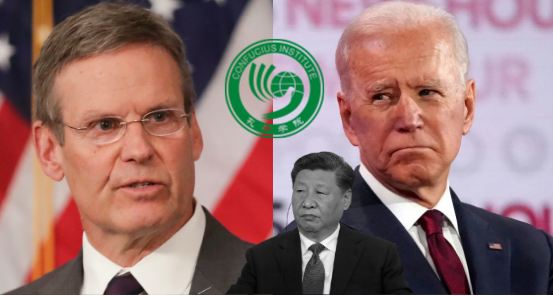 Tennessee Governor Bill Lee has introduced a legislation which bans the red state from hosting any Confucius Institutes, while also requiring schools, colleges and universities to ensure greater transparency when it comes to them receiving foreign investments or gifts from international entities. Being called the “Transparency in Foreign Investment Act,” the bill targets Confucius Institutes which are described as institutes operated by the office of Chinese Languages Council International which is associated with the Chinese Communist Party. Former President Donald Trump and his administration had come cracking down hard on such Chinese institutes.

The Tennessee Governor said, “Colleges and universities are a place for the robust debate of ideas – not a place for foreign governments to operate in the shadows.” The Republican added, “After the federal government rolled back critical reporting requirements around Confucius Institutes, my administration is taking action to provide Tennessee taxpayers greater transparency in all foreign investment on our campuses. I thank university leadership for working with us to preserve the integrity of our state and national security.”

The said bill, if signed into law, would prohibit Tennessee’s public colleges and universities from hosting Confucius Institutes. It would also mandate public institutions to disclose gifts and contracts from foreign sources and refuse any gift or contract that poses a credible national security threat. The state’s educational institutions would report to the Comptroller’s Office, which would, in turn, make the reports public for information.

Interestingly, such a legislation was necessitated after the Biden administration quietly overturned Trump’s policy on tracking Chinese influence in US schools and universities. According to the Daily Caller, the Biden administration on January 26 withdrew the proposed rule to the Department of Homeland Security, entitled, “Establishing Requirement for Student and Exchange Visitor Program Certified Schools to Disclose Agreements with Confucius Institutes and Classrooms.” The rule required American educational institutions to disclose their partnerships with Confucius Institutes.

Read more:  Trump sanitises the US of all Chinese propaganda, terminates cultural exchange programmes with China

Confucius Institutes are public educational partnerships between colleges and universities in China and other countries. Such ‘partnerships’ are funded and arranged in part by Hanban – the Confucius Institute Headquarters, which is itself affiliated to the Ministry of Education of the People’s Republic of China. The stated aim of the programme is to promote Chinese language and culture, support local Chinese teaching internationally, and facilitate cultural exchanges. Yet, such institutes instead act as front organisations to spread Chinese propaganda internationally.

Individual states are having to take the initiative of saving themselves, and the United States as a whole, of gross Chinese interference. The Biden administration, as is known, has made it a priority to do away with all safety measures protecting the country from the nefarious designs of the CCP. Red states, however, have realised that the inept federal government cannot be trusted with national security, which is why they are doing all that they can to prevent a Chinese takeover of their country.

In what also comes as a move showing the state of Tennessee standing up to the Biden administration’s diktats, Governor Bill Lee on Friday signed a transgender sports bill into law requiring students to prove their sex at birth in order to play in middle and high school sports. The bill states that “a student’s gender for purposes of participation in a public middle school or high school interscholastic athletic activity or event be determined by the student’s sex at the time of the student’s birth, as indicated on the student’s original birth certificate.”

The transgender sports bill was also necessitated after President Biden signed an executive order in January banning ‘discrimination’ based on gender identity in school sports and elsewhere. The executive order went on to make life hell for women athletes, who have been losing to biological males identifying themselves as females. This, because such males, or transgenders have an added physical advantage while competing against women in sports. Arkansas and Mississippi have already signed similar bills into laws, and a national momentum among no less than 21 states to stand up to Biden’s authoritarianism is gaining momentum.

Who would have thought that from being the leader of global anti-China activism only three months ago, the United States, due to the Biden administration, would have its own states being forced to draft independent laws to take on and counter Chinese influence in their territories? But again, Democrats never fail to astound people around the world and bring shame to their country.