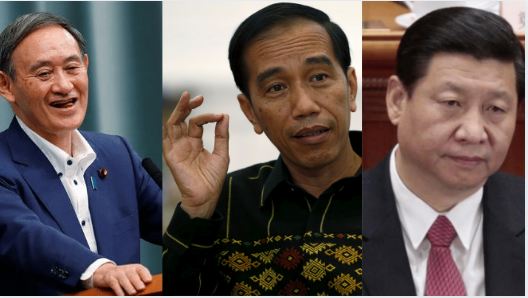 The Association of South-East Asian (ASEAN) countries have, for the longest time, maintained strategic neutrality when it comes to choosing between China and the USA. However, among the ASEAN countries, Indonesia has showcased that it is possible to stand with its shoulders straight, while countries like the Philippines were overtly kowtowing to China.

While the countries like the Philippines have only recently started protesting against Chinese bullying, and for the longest time ignored the Chinese activities to appease Xi Jinping, but Indonesia followed an entirely different approach. Indonesia under Joko Widodo has followed a mature foreign policy and as the saying goes, powerful respect powerful.

Joko Widodo has visited both Washington and Beijing, as well as managing to cultivate robust security cooperation with each superpower, strengthening Indonesia’s strategic leverage accordingly. When China stepped up its intrusion into Indonesian waters off the Natuna Islands in late 2019, the Indonesian president not only deployed fighter jets and the navy but personally visited the area to remind China that there would “no compromise” over maritime and territorial issues.

Read More: China opens a new front in the South China Sea, this time with Indonesia. And Jakarta is hitting back hard

Indonesia has acted like any mature and confident nation should. He played diplomacy with the CCP when it was required and opposed CCP’s expansionist designs when China overextended its hand. The recent activities further prove that Indonesia stands emboldened and will not be intimidated by China.

In the latest occurrence, Japan has overtly expressed its readiness to strengthen military ties with Indonesia. The two countries signed a pact on Tuesday allowing the transfer of Japanese defence equipment and technology to Jakarta. “It’s getting hard to take for granted the premises that have been supporting peace and prosperity of the international community,” the Japanese Foreign Minister said at the start of the meetings. “Today, I would like to hold talks to boost our broad-ranging cooperation to higher levels,” he added.

In response, Retno Marsudi, Indonesia’s foreign minister, has said she has been in touch with Motegi to address the Myanmar situation and COVID-19 responses. Retno has risen to prominence in the region as she attempts to broker talks with Myanmar’s military, which has killed over 500 demonstrators since staging a coup on February 1.

Read more: After backing Taiwan and the Philippines, Japan is set to militarily back Indonesia against China as the US leaves a void

In terms of foreign investment, Indonesia has successfully courted rival countries such as Japan as well as China. This deliberate diversification policy explains in part why Jakarta was able to negotiate incredibly favourable terms for the Jakarta-Bandung high-speed railway scheme, arguably the strongest under China’s Belt and Road Initiative.

As China failed to follow through on multibillion-dollar commitments, Jokowi did not hesitate to use Japan to pique Beijing’s interest. By 2019, Japan and China had surpassed the United States as Indonesia’s top foreign investors, with scores of high-profile development ventures in the works, as Jokowi (Joko Widodo) successfully pitted the two global titans against one another and at times shown China its stature as a paper dragon.

A little while ago, Indonesia’s civilian maritime force, Bakamla, has accused the Chinese naval ships of entering its 200-mile exclusive economic zone (EEZ) around the Natuna Islands and has clashed several times with Chinese coastguard vessels escorting Chinese fishing boats in the area.