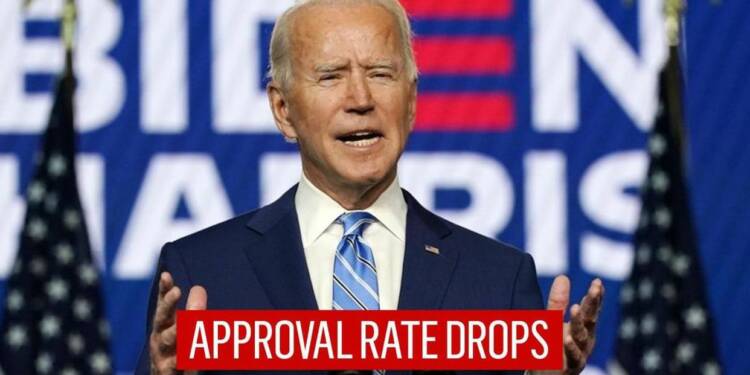 Joe Biden has followed the most impactful policy as the President if we consider how negatively the Biden administration’s policies have impacted the national security, the domestic situation as well as foreign relations of the USA. While the administration and their loyal media have tried their hardest to deny any reportage of the border catastrophe and the impact on the southern states, nothing is hidden from the public and it is visible with the rock bottom approval ratings.

Just a third of the Americans polled in an NPR/Marist poll released on Tuesday approve of Biden’s handling of the immigrant crisis, with 53 per cent disapproving of his performance. Though two-thirds of Democrats approve of Biden’s handling of the issue in the first two months of his administration, support among independents and Republicans is just 27% and 5%, respectively.

Trump has been known for a tough border policy that kept out migrants trying to illegally enter the United States. The proactive approach had affected the drug cartels as well which used the southern border to smuggle in drugs like methamphetamine and cocaine. Now, however, both illegal immigration, as well as the drug trade, have seen a conducive environment under the Biden regime, and this has left Trump with the responsibility to drag and shame Biden.

Speaking to Fox News’ Judge Jeanine Pirro, Donald Trump revealed plans of him making a visit to the crisis-struck border shortly, within the coming few weeks. The former President mentioned that a lot of people want him to visit the border, especially the border patrol agents and ICE officials who are suffering from a crisis of their own – that of a complete absence of leadership from the higher-ups.

Read more: ‘It’s going to destroy our country,’ Trump blasts Biden on the rampant illegal immigrant crisis at the border

The impact of this immigration policy on the Southern states has been disastrous, however, the Biden administration paid no heed to their suffering. As news broke of a potentially large influx of illegal immigrants bound for Gila Bend, Arizona, Mayor Chriss Riggs told Fox News last Monday that he is very worried about the escalating crisis at the Mexican border.

He said that his town ‒ about halfway between Sonoyta, Sonora, Mexico and Phoenix ‒ is essentially being made into a waypoint for illegal immigrants captured by federal authorities. He told host Charles Payne that Gila Bend was already “very economically poor” and that it lacks even the most basic support for what he fears would be a costly unfunded mandate.

Recently a statement of criticism by the Mexican leader also added to the pressure which is being exerted on Joe Biden to stop the mindless virtue signalling. “People don’t go to the United States for fun, they go out of necessity,” Lopez Obrador said, according to Reuters. “There needs to be support for the development of Central America and the south of Mexico. Particularly Central America.”

The poll indicates that Biden’s overall approval on immigration is down four points from late January when it stood at 38%. “It wasn’t a good issue for Biden when he was running for president. His candidacy was built around handling the coronavirus,” Lee Miringoff, director of the Marist Institute for Public Opinion, told Fox News. “There are no easy solutions. It’s a tough issue for him and people recognise that” the pollster noted. “It’s not the issue he wants to be focusing on in his first 100 days in office, but you don’t always get to pick your issues.”

The NPR/Marist poll was conducted on March 22-25, with 1,167 registered voters questioned by live telephone operators. The survey’s overall sampling error is plus or minus 3.4 percentage points.

China took a calculated risk when it decided to partner with Iran, but its calculations were way off the mark