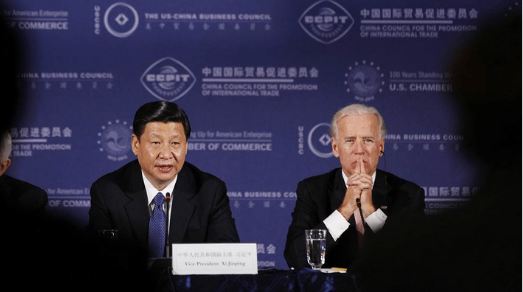 Although it was common knowledge that China had interfered in the US elections, the latest investigative report by The National Pulse lays bare the reality of the extent to which many organisation and influential individuals were compromised by the Chinese Communist Party and how did these people, on the behest of the CCP, influenced the elections. The direct beneficiary was the current President of the USA, Joe Biden.

The Chinese Communist Party’s Cyberspace Administration of China has boasted of one of the most critical connections between the 2020 U.S. Presidential election, the COVID-19 pandemic and the groups and individuals campaigning to stop President Trump and his “America First” agenda. The Chinese organisation has admitted China’s influence in both the United States and Europe link organisations such as the Berggruen Institute with the Chinese Communist Party (CCP).

Read More: Biden administration has dropped the biggest card that it had against China – the coronavirus and its subsequent mismanagement card

The link of many influential people and organisations, who were part of the Never Trump bandwagon, with the CCP and their activities in the run-up to the Presidential elections provide clear proof of Chinese collusion in US elections. The Berggruen Institute first rose to national attention after co-founding the “Transition Integrity Project” which advised on how Joe Biden could seize power on the back of an ostensible Trump victory.

An unearthed media communique entitled “Holding High the Banner of Party Media and Fulfilling Its Duties and Missions” appears on the Cyberspace Administration of China (CAC) website. Although spearheading censorship of the media and the internet in China, the government agency allegedly participates in “online propaganda and public opinion work” and upholds a “Socialist core value view.” To put it another way, they churn out pro-CCP lines overseas while crushing opposition at home.

The document boasts about the Chinese Communist Party’s Western-focused propaganda activities, which are carried out through the state-owned China Daily newspaper and website. China Daily also bought advertisement space in the New York Times, Wall Street Journal and Washington Post, the latter of which also publishes a weekly Fareed Zakaria opinion column. And if one notices the current opinion pieces by him, it becomes clear that he is mouthing the words provided by the CCP.

The presence of Jack Dorsey makes sense as it was Twitter that had systematically taken down the New York Post story of Hunter Biden story. At a congressional hearing on misinformation and social media, Jack Dorsey said that Twitter made a “total mistake” by barring users from sharing The Post’s bombshell October report about Hunter Biden’s emails. Twitter had suspended The New York Post’s account for more than two weeks, citing a “process bug” as the reason for the suspension. This helped Joe Biden immensely, given if the story had gone viral, then the prospects of Biden coming to power would have depleted immensely.

Read more: ‘I will not do it again,’ Hunter Biden senses the storm coming for his father over the Ukraine scandal

Another set of people mentioned in the list did their bit to ensure a Biden presidency. A collaborative effort between former Soros counsel Rosa Brooks and Berggruen executive Nils Gilman, TIP littered the U.S. media with commentary about how Joe Biden should refuse to concede in the event of an apparent election night victory for President Donald Trump – which is precisely what happened.

Brooks – who repeatedly refused to be interviewed by The National Pulse before pulling the TIP website down and ceasing operations before election day – had previously offered election assistance to Clinton campaign chief John Podesta, and specifically name-dropped now-Biden National Security Advisor Jake Sullivan in her e-mail.

All these attempts, the content and continued narrative building against Donald Trump and criticising any and every action of Mr Trump vis a vis China helped Biden come to power immensely. This provides clear proof of Chinese collusion in US elections of which Biden was the direct beneficiary.

Palestine is not an issue for the ‘kingmaker’ in Israel. It means Netanyahu is coming back