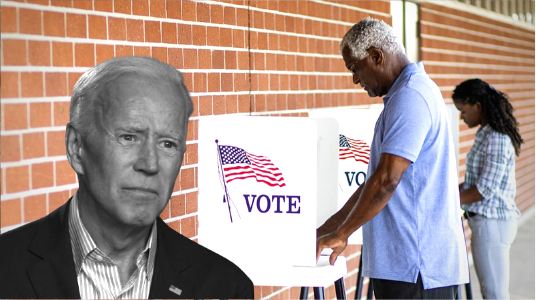 At a time when a fierce debate rages on in America over the new Georgia law, which seeks to streamline and formalise the voting process, it becomes necessary to have a close look at available statistics. Do Americans support formalisation of the voting process? Are they comfortable with being asked to show their identity cards during voting? After all, such questions will determine whether the Republican state of Georgia has done the right thing, irrespective of the cries of Democrats from across the country who find their comfortable and convenient eco-chamber shaken.

However, has anyone really consulted people of colour, particularly Blacks, over what they would like to see reformed in America’s election process? The answer is a gigantic no! For how can Blacks have any form of identification documents? The Democrats have generalised Blacks as a people who are backward, uneducated, poor and not in possession of any documents. So, when Americans were actually asked whether IDs should be made mandatory for voting, a poll released by Rasmussen Reports last month found that 75 per cent of them believe photo identification should be presented before voting and that 69 per cent of black voters support voter ID laws.

The polling also showed that only 21 per cent oppose voter ID laws. Broken down by party, 60 per cent of Democrats support showing an ID to vote compared to 89 per cent of Republicans. The US Congress, meanwhile, is also working to have the H.R. 1 bill passed, which seeks to further liberalise the election process and make it a fertile ground for all sorts of mishaps. The bill would remove several restrictions on voting, proposing expanding the right to vote to felons, allowing people to vote with an affidavit in place of a valid ID, and creating a nationwide automatic voter registration system. This, despite the overwhelming support which prevails in America on the question of IDs being required for voting. The ‘For The People Act’, which would loosen requirements on both registering to vote and voting, shows just how disconnected Democrats are from the ground realities in the United States.

Americans as a whole, according to the latest YouGov/The Economist poll, support requiring a photo ID in order to vote absentee, 53 per cent to 28 per cent. And Georgians are even more supportive: 74 per cent of registered voters in the UGA/AJC poll backed supported the idea of voters including a copy of their photo ID or other documentation in order to vote by mail. Only 22 per cent were opposed to the said idea. In another national poll conducted by Selzer & Co./Grinnell College, 56 per cent of American adults favoured keeping laws that require people to show a photo ID before voting, while just 36 per cent wanted to eliminate them.

Despite Americans wanting ID cards to be mandated for voting, the Democrat-controlled House of Representatives passed the H.R. 1 bill. On the issue, former President Donald Trump said, “The media might want to forget what happened in 2020. I haven’t. We’re not going to forget what happened, and we got to stop this bill.” The bill, by the way, would also reduce the number of members on the Federal Election Commission from six to five, making the commission a tool for Democrats to conduct elections and declare results as they deem fit.

While Democrats pass their own outrageous bill in the House, how they gather the temerity to attack Georgia for its own voting law remains incomprehensible. At the heart of the Democrats trying to keep elections informal, loose and easy to tamper with lies a palpable sense of ownership over persons of colour and Blacks.

Democrats consider themselves the messiahs of Blacks, who simply cannot have independent opinions. Well, guess what? Blacks have just overwhelmingly sided with the voter ID proponents and are themselves willing to vote by showing their own IDs. As such, Joe Biden might want to get down his senseless high horse and try to capture the ground sentiment in America.