As a full-blown humanitarian crisis breaks out at the Mexico border, Biden is forcing Republicans to delete evidence 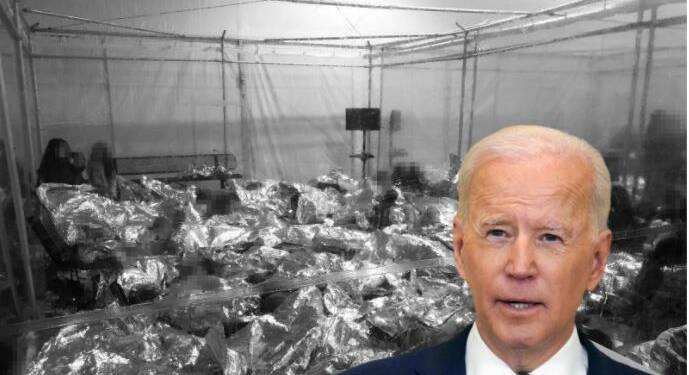 As the southern border crisis shows no signs of abating, Joe Biden’s authoritarianism too is not dying down. In fact, Biden’s politics of totalitarianism and media subjugation have only just gotten started. Already, the White House passed down verbal memos which led to a blanket ban on American media from being entertained in the country’s southern border and reporting upon the ongoing crisis. Now, in what comes as more shocking news, the Biden administration is reportedly intimidating members of the Republican party and no less than federal Senators to delete all photographs and pictures of the various facilities along the border.

Sen. Mike Braun of Indiana told the Washington Examiner that a Biden official asked Republican senators to delete photos they’d taken inside the Customs and Border Protection (CBP) migrant holding facility in Donna, Texas, on Friday. He said, “There was one of Biden’s representatives. I felt sorry for the lady because she actually talked to me about deleting a picture, but by the time she got to me, all those other pictures were taken, and that shows you the hypocrisy.”

The Senator had last month visited the crisis-struck southern border along with a team of 14 other GOP senators. The delegation was flabbergasted to see the conditions in which migrants, particularly minor children were being ‘caged’. Border Patrol officials inside the shelter also urged against taking photographs. But the Republicans refused to delete the images — instead sharing their images on social media. The pictures taken by the group of senators has gone a long way in exposing the inhumane conditions in which migrants have been housed by a supposed ‘humane’ administration.

These are the pictures the Biden administration doesn’t want the American people to see. This is why they won’t allow the press.

This is the CBP facility in Donna, Texas.

This is a humanitarian and a public health crisis. pic.twitter.com/UlibmvAeGN

Not only has the Biden administration banned the media from reporting on the border crisis, but has now also resorted to telling Republican legislators that they must delete all material and literature captured from the facilities where illegal immigrants are being caged. Incidentally, during the GOP visit to the border facilities, Sen. Ted Cruz too was blocked from filming a facility by a Biden staffer. “Please give dignity to the people,” the staffer told Cruz attempting to block his camera with her face. “Please give dignity to the people…Please respect the people, the rules.” However, Cruz retaliated by saying, “So you work for the commissioner, you’re a senior adviser, you were hired two weeks ago and you’re instructed to ask us to not have any pictures taken here because the political leadership at DHS does not want the American people to know it.”

Mind you, the full extent of the crisis is not fully known, since the Biden administration has put a blanket ban on the media from reporting the happenings from the southern border. The same gagging of the media has been executed citing the flimsy excuses of Covid-19 and privacy concerns. Evidently, the Biden administration has messed up the border crisis, and now has resorted to using all means necessary to ensure that vital information regarding the same is kept away from Americans, hampering directly with the right of free citizens of making fair and informed political and electoral choices in the near future. What this can also be called is a great grand coverup.

Myanmar is Putin’s ticket to Indo-Pacific, and he doesn’t care about Jinping or the CCP’s interests in the country