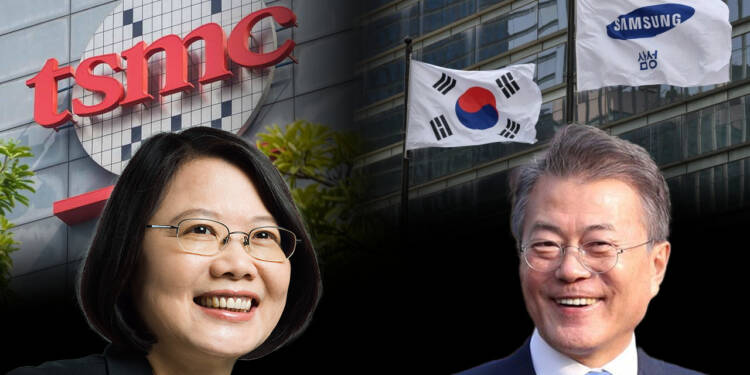 Ever since the time pandemic hit the world and China stepped up its aggression, countries all over the world realized that they cannot be dependent on the Chinese supply chains at least for future tech. Now that Intel, the world’s largest semiconductor company, has unveiled plans to invest $20 billion in two new chip-making facilities in Arizona by 2024 to counter China’s increasing dominance in the global supply chain, South Korea’s Samsung Electronics and Taiwan Semiconductor Manufacturing Co. will ensure that China is entirely eliminated from the chip-making game.

Samsung and Taiwan Semiconductor Manufacturing Co. (TSMC) are poised to widen their IC manufacturing lead in the chip industry this year as they outspend rivals in production technology, according to industry watcher IC Insights. “Governments would need to spend at least $30 billion a year for at least five years to have any reasonable chance of success,” the study said, referring to the minimum investment needed by the US, China, and the EU to build chipmakers with production technologies and capability comparable to Samsung and TSMC.

According to IC Insights, Samsung and TSMC’s cumulative capital investments will hit at least $55.5 billion this year, marking a record-high proportion of overall semiconductor industry outlays. Samsung and TSMC will definitely place much more space between themselves and their rivals this year in terms of advanced IC production technologies, according to IC Insights, since no other firms will equal these big amounts.

The trade war between China and the USA followed by the second cold war with the USA has made Chinese companies really starved of consumers as well as of supply lines. The Trump administration had banned the sale of semiconductors based on American secretive design and blacklisted the Semiconductor Manufacturing International Corporation (SMIC), the largest Chinese semiconductor manufacturer.

Both these steps followed by other smaller yet more precisely targeted steps have sent Chinese tech giants like Huawei into ICU. Guo Ping, rotating chairman at Huawei’s annual analysts’ conference said that “We will figure out how to survive” and “survival is the keyword for now.” Combine this with the world closing its doors on Huawei (annual revenue of 120 billion USD) and other Chinese tech giants, things look grim.

China is in no position economically to take on the task to counter the challenge. China’s public and private sectors have made concerted efforts to beef up the country’s chipmaking industry since 2014, but domestic chipmakers’ capital expenditure between 2017 and 2020 only amounted to $44.7 billion. Over the same period, Samsung alone has invested nearly twice that amount.

In addition to this, the fact that Quad countries too are looking for collaboration in this field and Samsung and TSMC have no intention of slowing down their investments and dominance in this domain. In consideration of these facts, South Korea’s Samsung and Taiwan’s TSMC have completely removed China from the Chip making game.