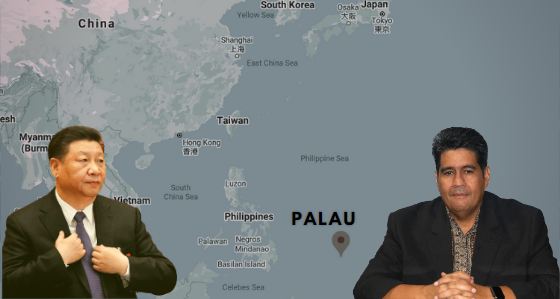 Palau is a pacific island nation with a population of 21,000 people. However, this tiny nation is standing up to Chinese belligerence and expansionism and showing daylight stars to Xi Jinping with its solid punches, which are landing straight on the CCP General Secretary’s face. In the latest news, Palau has snubbed China and earlier this month, its President, first lady and a US envoy travelled to Taiwan. But that is not all. The even more significant development is that these individuals were travelling to Taiwan on a maiden “travel bubble” journey which the two countries have worked out for themselves.

The ‘travel bubble’ system will allow tourists from Taiwan and Palau to visit each other’s countries at a time when the global tourism industry continues to be in a standstill owing to the Chinese pandemic. Importantly, the Pacific nation of Palau is one of just 15 countries that still recognise Taiwan over China. Make no mistake, Palau might be a small nation – but as reported by TFI, it is a very significant islands nation in the Pacific Ocean. Palau shares maritime boundaries with international waters to the north, Micronesia to the east, Indonesia to the south, and the Philippines to the west. And its peculiar positioning in the southwest of the Philippines makes it a good launchpad for any operations in the East China Sea and the South China Sea as well as anywhere in the Southeast Asia region.

Read more: Palau could be the military headquarters of the QUAD and its location is enough to send a chill down Xi’s spine

The island nation’s geostrategic importance is very high and it could serve as a prospective base of operations for the Quad countries in the future to take on China. To that end, Palau’s president – Surangel Whipps has come out and said that Palau will not be bullied by anyone into deciding its future – least of all by China. Speaking to AFP recently, President Whipps said, “If we were the last man standing, we should be because Taiwan has been with us from the beginning.” He added, “I’ve had meetings with them and the first thing they said to me before, on a phone call, was ‘What you’re doing is illegal, recognising Taiwan is illegal. You need to stop it’…You know, that’s the tone they use.” Then, in a warning to China, President Whipps said, “We shouldn’t be told we can’t be friends with so and so.”

We salute President Whipps for defending #Palau's🇵🇼 right to believe in freedom, democracy & relations with #Taiwan🇹🇼. Trust, cooperation & friendship: These are the hallmarks of a successful partnership of prosperity delivering long-term benefits for our countries & the region. https://t.co/VKyMo8OoHZ pic.twitter.com/3eF8lGnYp8

The size of Palau might be small, but its courage is immense. Standing up to a bully like China while having a meagre population of just over 20,000 people is no easy task. Palau also does not have, in itself, the military wherewithal to repulse a Chinese offensive against it. Yet, it is standing up for what is right, and is being led by a President who will rather give up his life than bow down before China. It would not be a particularly difficult task for China to swallow Palau whole, and the same is known to President Surangel Whipps. However, he is standing by Taiwan even while the odds are against him and his nation.

China, though, would not dare invade Palau. The island nation has a 50-year defence agreement with the U.S., known as the Compact of Free Association. That is a landmine the paper dragon would not want to step onto just yet. Palau is also looking to gain from the decentralisation of US troops across the Indo-Pacific and is pushing hard to secure US military bases on its territory.

China is going through a pretty bad phase, as Palau too takes to thrashing the living daylights out of it. Meanwhile, the courage of Palau could serve as a reminder to the wimps of the Chinese military, to spend some days in the Pacific islands in order to learn a thing or two about combat, courage and principles.