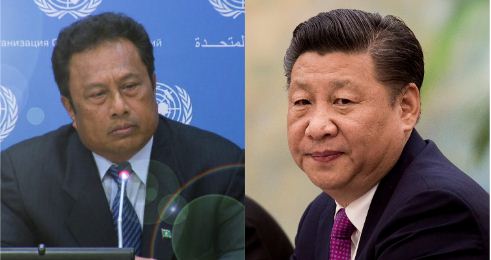 China has come to realise how the Indo-Pacific region is changing with the increasing influence of QUAD- an informal strategic forum comprising Australia, India, Japan and the US. A tiny island nation in the Pacific Ocean which is hardly visible on the world map has stood up to the terror of Chinese fishing expansionism. We are taking about Palau, which has, in recent times, warmed up to the QUAD.

Palau has detained a Chinese fishing vessel and its 28 crew. The boat is alleged to have been illegally harvesting sea cucumber- a lucrative harvest for fishing crews all across the Pacific Ocean. In fact, the Chinese vessel was intercepted inside Palau’s territorial waters by a patrol boat at the Helen Reef. The Chinese boat was escorted to the main island of Koror and now Palau is looking to decide the future course of action.

Palau is yet to determine whether to formally charge the crew of the detained Chinese fishing boat in a Court of law and the investigation into the case is going on. Palau President Tommy Remengesau Jr disclosed that the island’s government would also contact the Chinese government over the possible breach of Palau’s domestic laws.

Remengesau Jr also revealed that as per a preliminary investigation, the Chinese crew attempted to bribe the Helen Reef rangers, who intercepted the fishing boat that intruded into Palau’s territorial waters. Palau’s President added that the contents of the vessel were being checked.

He said, “They will be checking for things like illegal cargo and when everything is finished, the Palau government will indicate the necessary charges.” On the allegations of illegally harvesting sea cucumber, Remengesau Jr said, “They did have sea cucumber on there… it’s estimated about 500 pounds (225 kilograms).”

Anyhow, the detention of the Chinese fishing crew comes as a huge setback for the paper dragon. This is the first time that the tiny island nation has gone as far as intercepting and detaining a Chinese fishing boat, along with its crew, intruding into its territorial waters.

Palau has always been opposed to Chinese authoritianism and expansionism. Despite Chinese belligerence, Palau has stood by its friend in the region- Taiwan, and is among the few countries that still recognise it.

Palau is located very close to the South China Sea which is currently marked by growing tensions between the US Navy and the Chinese People’s Liberation Army Navy. And the island nation has no qualms about weaponising its startegic location. Recently, Remengesau Jr disclosed that he invited the US Defense Secretary Mark Esper to build a military base at Palau.

Palau knows that the QUAD values it. Going ahead, the QUAD might want to establish a base in Palau as a strategic outpost close to China, in order to take on the Communist nation in the Western Pacific. Palau is therefore getting emboldened about hitting back at China, if the latter tries to violate the island nation’s territorial sovereignty.

For China, Palau’s steadfast character serves as a bitter realisation of the changing realities of the Indo-Pacific, in the context of QUAD’s increasing influence in the region. No one, including tiny island nations, is ready to tolerate Chinese aggression any longer.