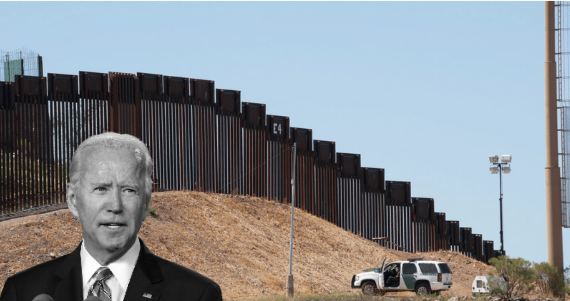 President Joe Biden – the liberal mascot who was supposed to ‘heal’ and ‘unite’ the U.S. has turned out to be yet another pro-Wall activist. According to the Washington Times, Department of Homeland Security (DHS) Secretary Alejandro Mayorkas told department employees that the Biden administration may restart border wall construction to plug what were identified as “gaps” in the current barrier. The southern border crisis has turned uncontrollable for the Biden administration, and only radical decisions will be able to resolve it. Now, Biden seems to have taken a radical, Trump-era decision of resuming the wall construction.

The decision to halt the border wall construction had earned Biden sufficient laurels initially – mostly from fellow Democrats and radical, braindead liberals. Sane Americans, however, realised what a disastrous puppet had just made his way into the White House. However, time has knocked sense into Joe Biden, and his administration is looking for secretive ways to resume the border wall construction. Of course, Biden’s political career is at stake, but so is the future of America. By the looks of it, if the unprecedented border crisis is not resolved by the Biden administration soon enough – America as we know, will cease to exist in the near future. Joe Biden signed America’s death warrant the day he rescinded his predecessor – Donald Trump’s historic decision to build a border wall to insulate America.

Now that the Biden administration is resorting to a proxy-construction of the wall, it becomes imperative to note how Donald Trump was right all along. The DHS Secretary was very clear in his conversation with Immigration and Customs Enforcement (ICE) employees last week, and said that Joe Biden’s halting of the border wall had still left “room to make decisions” on finishing some “gaps in the wall.” According to notes of the said ICE session, Mayorkas said, “The president has communicated quite clearly his decision that the emergency that triggered the devotion of DOD funds to the construction of the border wall is ended. But that leaves room to make decisions as the administration, as part of the administration, in particular areas of the wall that need renovation, particular projects that need to be finished.”

He said those parts include “gaps,” “gates,” and areas “where the wall has been completed but the technology has not been implemented.” Radical leftists and America-haters are not liking Biden’s latest wall push a tad bit. Rep. Ilhan Omar has mounted an offensive against President Joe Biden for continuing what she called the construction of Donald Trump’s “xenophobic and racist” southern border wall. Taking to Twitter, Omar said, “It’s shameful and unacceptable for @POTUS to continue the construction of Trump’s xenophobic and racist wall.”

Read more: Neither Joe Biden nor Kamala is handling the border issue. America’s southern states have been left defenceless

Joe Biden must have definitely pre-empted such liberal backlash. Yet, the southern border crisis is just too humongous and dangerous for him to not resume the construction of the wall, albeit secretly. Biden had tasked VP Kamala Harris to take charge of the border crisis and address its root causes. Harris, however, seems least interested to take charge and has not even visited the crisis-struck border so far. Hours after Biden had tapped Harris to lead his administration’s efforts to resolve the “huge problem” at the country’s southern border, Arizona’s Governor Doug Ducey had dubbed Harris as the “worst possible choice” for the job. The fears of the Arizona Governor proved true soon enough, as Kamala Harris seemed clueless about how to tackle the border crisis and has so far failed to resolve it.

Harris’ boss – Joe Biden too is clueless. In fact, his entire administration is clueless on how to handle the border crisis. The administration tried banning the media from covering the border situation, harassing Republican senators visiting the border; yet, the border crisis did not vanish into thin air. So, Biden has come to the profound conclusion that his halting of the border wall has played a huge role in the crisis going out of hand. This realisation seems to have played a big role in Biden deciding to restart the construction of the wall, even if in a proxy and half-hearted manner.

Donald Trump’s border wall and his stern border policies had incredibly discouraged immigrants from taking the Northern journey. Yet, Joe Biden’s open borders, pro-immigrant rhetoric since last year has only emboldened illegal immigrants to enter the United States, knowing fully well that they could somehow make their way to successfully settle in America. Only Trump’s wall can save America now, and the face of the Biden administration too.

‘If US is so bad, why is your family living there?,’ Chinese people slam Chinese official who thrashed US