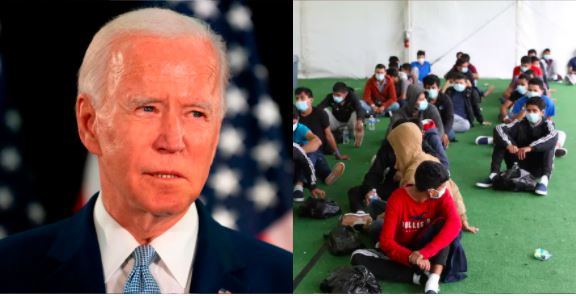 Immigration has been one of the biggest issues for the Biden administration ever since Joe Biden was sworn in as the President of the United States. Now, according to US government records, the Biden administration is spending at least $62 million of American taxpayers’ money a week to care for unaccompanied migrant children in the custody of the Department of Health and Human Services.

The Department of Health and Human Services has confirmed to have opened at least 11 new facilities in the last month, with more on the way, relying on conference centres, military sites, and influx space to keep children out of Border Patrol stations, which are similar to jails and unsuitable for children. The department manages a migrant children’s shelter network, but space has been limited in response to the pandemic over the last year, forcing the organisation to try to put more costly temporary facilities online.

According to figures shared with CNN and first published by the Washington Post, the daily cost per child is more than double that of the department’s already defined shelter network, at around $775 per day compared to around $290 per day. Temporary shelters for migrant children are more expensive due to the need to build facilities and employ workers in a limited period of time, according to the Department of Health and Human Services.

Jen Psaki, the White House press secretary, cited 2019 when asked about the high costs on Friday. “Back in 2019, the previous administration sought — and received — almost $3 billion in supplementary funds for the (unaccompanied children) programme from Congress,” she said, noting that millions more had already been transferred to the programme.

According to the agency’s data, US Customs and Border Protection apprehended 18,890 unaccompanied children in March, a new high and nearly double the number of migrant children apprehended in February. The surge in arrivals has resulted in overcrowding in border facilities, necessitating the immediate opening of facilities to accommodate children.

“By activating temporary shelters — and placing future shelters on reserve status,” the department said in a statement, “(the Office of Refugee Resettlement) has the capacity to react to ever-changing levels of referrals and, in this case, an emergency situation.”

According to the most recent government reports, there were 16,941 children in the custody of Health and Human Services as of Thursday and 3,881 in CBP custody — an organisation that is not prepared to care for children.

Nonetheless, the regular number of children experienced exceeds those discharged from Health and Human Services, suggesting that there are more arrivals than releases to sponsors, indicating a need for additional capacity.

“The basic problem right now is that each day more children are arriving than are being released to parents and sponsors. There will keep being a need for more capacity unless either the number of arriving children goes down or HHS is able to more quickly release children,” said Mark Greenberg, a senior fellow at the Migration Policy Institute and a former Health and Human Services official.

“The important thing it’s accomplishing is helping to get children out of CBP holding facilities, which are severely crowded, not a good place for children during any circumstances, particularly so during the pandemic,” Greenberg said, referring to building up capacity.

According to internal documents collected by CNN, the total period of stay in HHS custody is 31 days. The amount of time spent in custody varies depending on the sponsor category, which may range from parents or guardians to distant relatives. Children in custody who have a parent or guardian in the United States, for an instance, are more likely to be discharged to that sponsor in 25 days on average, compared to an unrelated sponsor or distant relative, who may take up to 54 days, according to the records.

Immigration has been one of the biggest issues for the Biden administration. In its pursuit to reverse the border policies of the previous administration, it has engulfed the southern states into a full-blown crisis.

Given that no one in the administration is interested in dealing with the issue at hand, the illegal immigrants will have to go through hell in the false hope of getting to the promised land. Border Patrol has apprehended more than 29,000 unaccompanied minors crossing the border illegally so far this fiscal year (which started on October 1, 2020). According to Customs and Border Protection (CBP) figures, just over 33,000 people were apprehended in the fiscal year 2020. This year’s figures are on pace to eclipse those of the 2019 outbreak, which saw 80,634 minors apprehended.