Trump calls Pence a disaster, and McConnell a dumb S-O-B as the fight over Alaska GOP nominee intensifies 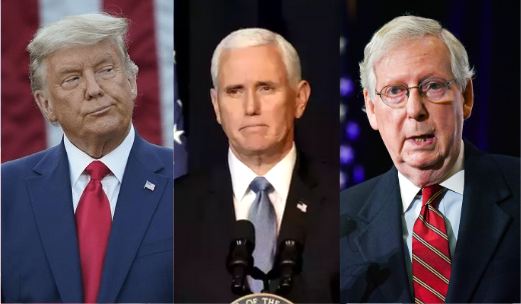 The Republican camp is back in action as the midterms come closer, and at the centre of all this is the former President of the USA, Donald Trump. However, Trump understands the gravity of the coming elections and thus wants to clear the Republican Party in the coming years of the people who could become Achilles Heel. In line with this, Trump called Pence a disaster, and McConnell a dumb S-O-B as the fight over Alaska GOP nominee intensifies.

At a time when a section of Republicans are supporting the very Senators who toed the line of Democrats against Donald Trump in the impeachment trial, for example Alaska Sen. Lisa Murkowski, Trump is no longer willing to let the rot in the Republican party spread any further. Donald Trump addressed a group of Republicans at dinner and promised to help them win Congress seats in the 2022 elections. During the event, he criticized Senate minority leader, Mitch McConnell and former Vice President, Mike Pence and it was most likely how a section of Republicans abandoned Trump during his last days in White House and afterwards.

He hosted donors of the Republican National Committee and promised them revenge and victory in the next elections. Since he was put on trial for the second time for impeachment, Trump has openly criticised McConnell. And this time he called the senator a “son of a b***h”, an attendee told Reuters anonymously. This shows how frustrated Trump is with the Senate Minority leader, given he has continued to take an anti-Trump stance at a time when the Republicans need to give a united stand and purge the party of people who can compromise the prospect of the party’s victory going ahead.

Though Trump’s attack on Murkowski is the clearest indication that he intends to campaign against her, the Alaska Republican is no slouch in the polls. He is intending to make sure that the people who are extending the Democrat agenda on a Republican ticket should face the music.

Read more: Donald Trump is coming to Alaska to handle an ‘indisciplined’ Murkowski

While Donald Trump plans to streamline the party, Mitch McConnell-aligned super PAC backs Lisa Murkowski, setting up a clash with the pro-Trump candidate. The senator has retained the support of McConnell, who has said he will “absolutely” support Murkowski. Alaska Republican Sen. Dan Sullivan has also said he’d support Murkowski too, “if” she runs again.

The frustration of Trump stems from these developments. While he wants the best for the party and has lost fortune for the sake of the Republican Party and the people of the USA, fellow Republicans toeing the line anti-thetical to Donald Trump and against the prospect of a Republican victory going ahead. The Alaska race is emerging as the first flashpoint between McConnell and Trump over the future of the Senate and the Republican Party. Trump has already endorsed a handful of incumbent senators, including Marco Rubio of Florida and Jerry Moran of Kansas.

The former US president also said that he has spoken with Pence since leaving the White House and told him that he was still disappointed in him. This comes after multiple sources reported that Trump chastised Pence for not interfering with Joe Biden’s confirmation and for failing to defend Trump following the Capitol riots.

These statements during the event tell us that the Republican Party is now having the hard conversations which it was shying away from, and as the fight over the Alaska GOP nominee intensifies we can expect the conversations to become more heated, leading to a better Republican line up for the elections ahead.