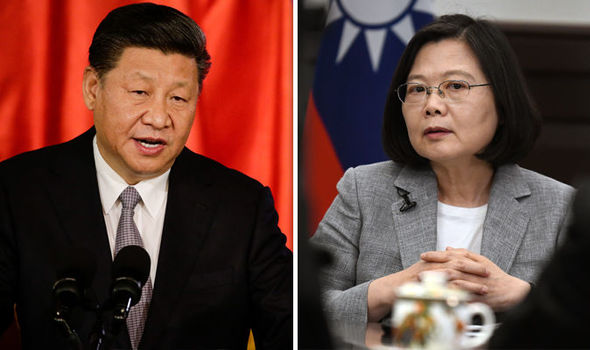 Chinese military intimidation is in full swing and the US is indifferent. China first went berserk in the East China Sea with the Senkaku Islands, then Chinese President Xi Jinping issued an “open fire” declaration for the Chinese Coast Guard and finally the paper Dragon bullied the Philippines in the South China Sea. Yet, the Biden administration never made an honest attempt to deter the Chinese military. So, China is now going for its ultimate target- Taiwan.

The actions and words of China’s State media and military suggest Beijing feels that it can bully the island nation of Taiwan, and the Biden administration would not even react. So, the Communist-authoritarian nation deployed 25 warplanes into the Southwest section of Taiwan’s air defence identification zone, as per a statement by Taiwan’s Ministry of National Defence. This was China’s biggest sortie toward Taiwan this year.

The Chinese State media too has been using some very harsh language about Taiwan. Hu Xijin, chief editor of Global Times, a Chinese State media outlet that serves as an overhang for the Chinese Foreign Ministry, said that Chinese fighter planes would fly over Taiwan to “declare sovereignty” if relations between Washington and Taipei continue to improve.

Xijin also spoke about the big sortie toward Taiwan. He said that the operation was a response to the US State Department’s loosening of interaction guidelines between Taiwanese and American officials.
Xijin further warned that the Chinese People’s Liberation Army (PLA) would “step up military pressure” in case ties between Taiwan and the US warmed further. The chief editor of Global Times added, “If Taiwan forces open fire, that will be the moment of all-out war across the Taiwan Strait.”

Adding further, the Global Times chief editor said that the US and Taiwan needed to “stop provocations” or “be prepared to welcome more PLA planes, closer to Taiwan proper and even directly above the island.”

What China did with Taiwan and the way the Chinese State media managed to issue warnings for the US and Taiwan is an illustration of Beijing’s bullishness. China understands the lack of Biden administration’s intent on the subject of defending Taiwan from the Communist giant next door.

It is true that the Biden administration officials have spoken tough on the issue of China-Taiwan tensions. Antony Blinken, the US Secretary of State, even said, “It would be a serious mistake for anyone to try to change the existing status quo by force.” But then Chinese officials understand that the US is hardly capable of moving beyond rhetoric and mere words.

Beijing has tested the waters time and again. It has been acting aggressively in Japanese waters near the Senkaku Islands, but all that Biden managed to do was reposition American troops stationed in Japan. Similarly, the US is not reacting appropriately in face of muscle-flexing by Chinese maritime militias at Whitsun Reef in the South China Sea.

China has learnt something extremely crucial- the Biden administration is going to remain indifferent in face of Chinese bullishness. Beijing has assumed that it has a license to strongarm Taiwan, while a timid administration in the United States is likely to sit quietly. So, the paper Dragon is now flexing its muscles against the island nation rather openly.