Hugging America and kissing the Chinese, the clever philandering of Iran 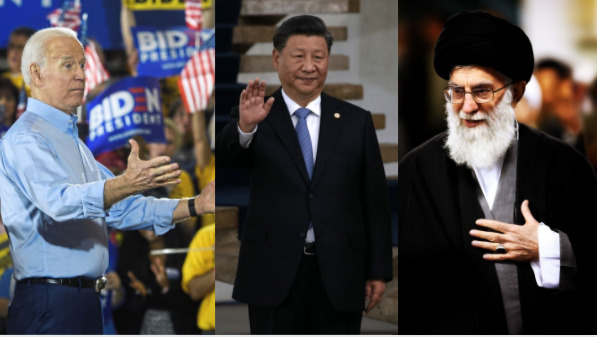 What should an ambitious minnow sandwiched between two giants do? Wisdom dictates it should befriend both of them and get something out of both the giants. This is exactly what the Shia-majority nation of Iran is doing. On one hand, it is hugging the Biden administration at the helm of affairs in the Oval Office and on the other hand, it is kissing the Chinese.

To put it briefly, Iran has been blackmailing the US because it knows that US President Joe Biden is way too desperate for reviving the Joint Comprehensive Plan of Action (JCPOA) or the Iran nuclear deal. On the other hand, Tehran has also signed a 25-year strategic cooperation agreement that includes collaboration in all areas including commerce, economics and transportation with China.

The relationship between Iran and China was not very natural. It was a consequence of Trump’s “maximum pressure” policy against Tehran. Trump crippled Iran politically, economically and diplomatically, and therefore, Tehran needed some external support to reinvigorate itself.

So, in the month of August last year, Iran’s Foreign Minister Mohammad Zarif visited China and met his counterpart, Wang Yi. Zarif reportedly presented a secret document to his Chinese counterpart. The details were not made public. The document was, however, reported to be a roadmap for a comprehensive 25 year-long Sino-Iranian strategic partnership.

As a part of this strategic roadmap, Iran secured $280 billion in Chinese investments for the development of Iranian gas, oil and petrochemical products. According to a New York Times report, Beijing agreed to spend $400 billion in Iran over the next 25 years in return for a secure supply of oil to boost its growing economy.

Iran itself views the deal as beneficial. According to Iran’s Fars news agency, the agreement should be viewed as a long-term political, diplomatic, economic and cultural programme that includes investment and finance clauses as well as reciprocal support in international forums.

However, the US-Iran dynamics themselves have changed drastically. After Biden’s accession to power, the Oval Office’s hostility towards Tehran has vanished. In fact, right from the word go, Biden has been moving with a one-point agenda on Iran, which is to revive the defective JCPOA at any cost. The burden of the Iran nuclear deal has been inherited by Biden in legacy from his former boss, Barack Obama.

The Iranian government too has been making full use of Biden’s political compulsions. Tehran understands that Biden wants to revive the JCPOA, even if Iran doesn’t move towards denuclearisation. Recently, the International Atomic Energy Agency (IAEA) reported that Iran has “almost completed preparations” to launch 60 per cent uranium enrichment.

According to the United Nations’ nuclear watchdog, Iran said that it will activate 1,024 more IR-1 centrifuges, its older first generation of the machines at the Natanz nuclear plant. Yet, the US and Iran are supposed to meet in Vienna for salvaging the 2015 nuclear deal. Despite Iran’s provocations, the Biden administration is acting predictably and failing to harm Iran’s interests.

Tehran is also pushing for a full rollback of the sanctions that were imposed on it by the Trump administration, as a necessary precondition for any fruitful discussions regarding nuclear compliance. In conclusion, Tehran has managed to step up its nuclear preparations, while also stepping up the pressure on Biden to roll back sanctions.

Read More: Iran says it will go ahead with nuclear enrichment and it is a message for Biden and not Israel

Till now, the Biden administration has been resisting Iranian pressure. But ultimately, he will have to succumb. Biden is too weak a President to defy his ex-boss Barack Obama who had announced the Iran nuclear deal with much fanfare. The Biden administration doesn’t really have a choice, as it has a legacy issue of returning to the Iran nuclear deal, regardless of the geopolitical costs and consequences.

However, the biggest takeaway is how Iran has managed to do two things at once. It has sealed a 25 year cooperation agreement with one giant- China, and at the same time, it has managed to move towards a full rollback of sanctions from the other giant, the United States.

To be precise, Tehran might not need the China deal any longer, because the US will anyway go soft on the Iranian economy. But Iran doesn’t mind if two giants shower gifts on it simultaneously. This is Tehran’s clever philandering- it is tempting China strategically on one side, and blackmailing benefits out of the US on the other.

Iran going rogue and violating all clauses of its supposed deal is cool with Biden, but Israel defending itself is not cool