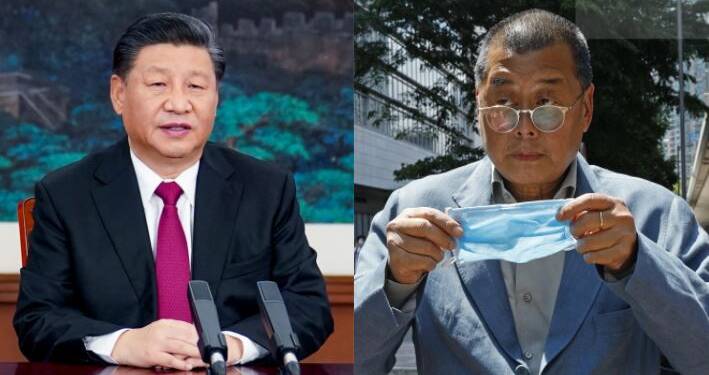 Xi Jinping is a very exceptional authoritarian leader, as he is someone who gets more and more scared as he concentrates power within himself. He was earlier scared of Jack Ma and now with the recent actions, he has portrayed how scared he is of Chinese Media tycoon Jimmy Lai. Jimmy Lai has been sent to 14 months imprisonment by the Chinese government.

Pro-Beijing media and government officials in Hong Kong are focusing their energies on shutting down the local independent newspaper Apple Daily, one of the city’s few remaining free press outlets. Apple Daily was created by Jimmy Lai, a Hong Kong media mogul who was sentenced to 14 months in prison on April 16 for his role in Hong Kong’s mass anti-Beijing and pro-democracy protests in 2019.

China has been suffering from an extreme economic downturn and as people are becoming frustrated, the Chinese Communist Party has been finding it more and more difficult to keep its acceptance among the Chinese populace. And at the same time, there are multiple factions in the Chinese political spectrum, fighting for supremacy. While post the opening up of China, the faction representing and trending on the ideas of Deng Xiaoping was seen to be in the driving seat. But with the advent of Xi Jinping and his interests in becoming the modern Mao, Deng and liberal factions have been on the defensive. He has increased the surveillance state and its footprint and is tightening his grip on any remaining free media outlet.

Ta Kung Pao, a Hong Kong Chinese language newspaper owned by the Chinese Communist Party’s Hong Kong liaison office, also published an editorial calling for the publication of Apple Daily to be banned. The article accused the Apple Daily of “colluding with foreign powers, inciting aggression, fabricating news, and endangering national security,” all of which are illegal under Beijing’s National Security Law. “Let us stand tall in fallen times,” Lai said in response to the allegations, according to Apple Daily.

Apple Daily is widely regarded as the benchmark of Hong Kong’s press freedom, and observers are worried that the Beijing-backed Hong Kong government may start with Apple Daily to completely purge the Hong Kong media. However, this is exactly why Xi Jinping is scared of the newspaper and its tycoon Jimmy Lai. He is the most vulnerable authoritarian ruler in the world and thus, he is so thin-skinned that he cannot take a shred of criticism and will jail anyone that holds a mirror to him.

“I believe that the authorities will take actions against the entire Hong Kong media,” Fu King-Wa, associate professor of the Journalism and Media Research Center of the University of Hong Kong, told Radio Free Asia (RFA) about the situation. The city was once hailed as a “beacon of freedom of expression,” but its ranking on Reporters Without Borders’ World Press Freedom Index has fallen to 80th place, down from 18th place in 2002.

The shrinking space for press freedom has been a concern for the world, and Hong Kong has been slipping into the abyss of Authoritarianism. The Chinese Communist Party and Xi Jinping are scared of the people who shine bright in this gloomy Chinese environment. Jimmy Lai is one of the very few remaining guys who are maintaining an example and standing tall in the face of increased scrutiny, intimidation and threats.

Putin must save Navalny from dying because his death will give Biden just the opportunity, he needs

Capital Cop Brian Sicknick was not really bludgeoned to death, he died of natural causes