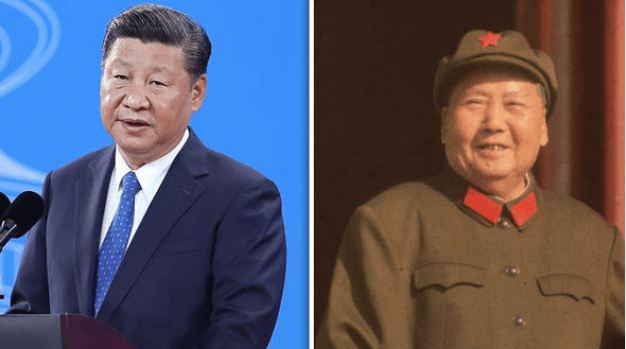 China has been suffering from an extreme economic downturn and as people are becoming frustrated, the Chinese Communist Party has been finding it more and more difficult to keep its acceptance among the Chinese populace. And at the same time, there are multiple factions in the Chinese political spectrum, fighting for supremacy. While post the opening up of China, the faction representing and trending on the ideas of Deng Xiaoping was seen to be in the driving seat. But with the advent of Xi Jinping and his interests in becoming the modern Mao, Deng and liberal factions have been on the defensive.

In the latest move to garner acceptance of Mao’s violent ideology, the ruling Chinese Communist Party (CCP) has allowed public access to the grave of Jiang Qing, a former member of the ‘Gang of Four’ and widow of late supreme leader Mao Zedong, ahead of its centenary on July 1. “This was sent to me by a friend mainland China, and I am forwarding it here,” former CCP Party School professor Cai Xia, who now lives in the United States, said via her Twitter account on April 5, the traditional grave-tending festival where people make long journeys to honour the dead.

The gang of four was held responsible for the massacres and excesses during the cultural revolution, which was a period of utter chaos and a grand show of Maoist violent ideology. The CCP banned any commemorations of its main figures or events for decades after late supreme leader Mao Zedong ushered in 10 years of mayhem and bloodshed with his Great Proletarian Cultural Revolution, and public discourse on the period was confined to the official line.

Jiang, along with the rest of the Gang of Four, bore a large share of the responsibility for the Cultural Revolution’s brutality and chaos (1966-1976). Security guards were stationed at her grave in Beijing’s Futian Cemetery as recently as 2015 to discourage visitors from leaving offerings and tributes.

The country, since the second term of Xi Jinping, has seen an obvious and successful attempt to counter any sort of ideological opposition to Xi Jinping. As he is an adherent of Mao and wants to rise to the stature of Mao himself, he perceives the most threat from the ideological loyal of Deng Xiaoping’s ideals and the liberals (make up a very small minority).

China is an autocracy of Communists, and in such a system their legitimacy revolves around the party’s ability to sustain a large acceptance of the communist party among the citizen of the country in the discussion. In this case, the Chinese Communist Party’s fast depreciating popularity and even acceptance among the Chinese people have become a major concern for the CCP. This is why the party is making multiple attempts to capitalize on fed nationalism. And the act of humiliating the American delegation was part of the effort by Xi Jinping and CCP to garner support and acceptance among the Chinese population.

Read more: American humiliation in Alaska is a major shot in the arm of the CCP which was struggling with waning popularity

This realisation of the possibility of losing acceptance and thus losing legitimacy in China has further scared Xi Jinping, and this is why he wants to bring back the era of violent Maoist cultural revolution so that he can violently crush any ideological opposition to him and, at the same time, justify doing so.

Beijing dissident Zha Jianguo said the majority of Chinese people don’t want a return to the Mao era. “The Deng faction opposes both the Maoists and the liberals, but is more tolerant to the Maoists because they are all on the same page when it comes to the supremacy of party leadership,” he said. But he also said the most powerful families in China’s political and financial elite are more likely to side with Maoists than liberals today. “The upper echelons are a little bit more tolerant to the Maoists, and there is no tolerance at all for the liberals,” Zha said.

So, in this politically unstable situation, Xi Jinping, to further strengthen his hold on the leadership position, has decided to legitimise the Cultural revolution and by doing so he is trying to bring back the violent Maoist cultural revolution era, which will then be used to quell any dissent and remove differing ideological strains from the CCP.