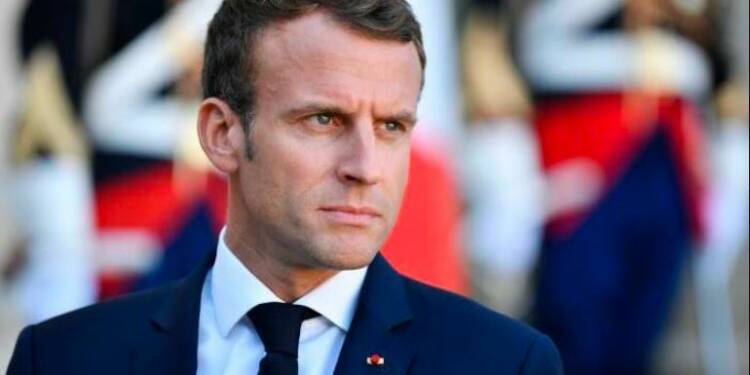 In yet another Islamist terror attack, which has struck France, a 49-year-old police officer, identified by authorities as Stephanie M. was brutally attacked by a Tunisian illegal immigrant in the French town of Rambouillet on Friday. The terrorist, who shouted “Allahu Akbar” before brutally attacking an innocent policewoman was shot to death by her colleagues. The administrative police employee – who is the latest victim of radical Islamism in France, was a mother of two and was returning after a lunch break when she was stabbed in the neck outside a police station.

France’s national anti-terrorism prosecutors said they had opened a terror investigation, also involving the DGSI domestic intelligence service, into the murder of a person holding public authority. Three people from the suspect’s “entourage” were detained on Friday. Expressing anguish over the cowardly attack on French identity by a radical Islamist unfit for human civilisation, President Emmanuel Macron took to Twitter to say, “In the fight against Islamist terrorism, we will not give up.”

French Prime Minister Jean Castex and Interior Minister Gérald Darmanin visited the scene of the attack, where the former reaffirmed the country’s fight against radical Islamism. “France has lost one of its everyday heroines in a barbaric gesture of infinite cowardice,” Castex told reporters at the scene, “To her loved ones, I want to express the support of the whole nation. To our security forces, I want to say that I share their emotion and their indignation.”

The latest terror attack on a French public servant has only strengthened the resolve of President Emmanuel Macron to weed out radical Islamists from the country. Already, France’s fight against Islamism and radical Islamic extremists has earned global applause, while certain radical Muslim countries around the world are equally irked. Notwithstanding opposition to his drive to weed out Islamism of France, Macron is all set to come cracking down harder on anti-social elements who are intoxicated with a sense of religious supremacy.

Following Samuel Paty’s beheading, France has gone on an offensive to deliver a solid and just response to the weaponization of Islam in France. Macron has risen to lead his people in the face of rising violence and has chastised radical Islamists for their extremist approach, which is incompatible with the French way of life.

According to legislation spearheaded by Macron himself, and which seeks to cull the threat of Islamist extremism in France, symbols or clothing expressing religious faith in public would stand banned. This includes bans on face coverings including for parents accompanying children on school outings, during national sports competitions and for minors in public places, as well as the full-body swimsuit, known as the burkini at swimming pools.

Other proposed legislation includes prohibiting religion from being practised in public colleges and other higher education facilities, with French senators citing prayers in hallways and other “inappropriate locations” as examples. The legislation also allows for intervention in mosques and the associations in charge of their management, as well as financial oversight of Muslim-owned associations and non-governmental organisations. It also limits the Muslim community’s educational options by prohibiting families from providing home education to their children.

With every attack on an innocent French citizen, Islamists dig their own grave. With every attack, the resolve of Emmanuel Macron to fight back against Islamist extremism is strengthened. Indeed, the world has a lot to learn from France’s handling of Islamism.