As Merkel steps down, the fear of losing EU grips China. Chinese Premier begs the EU 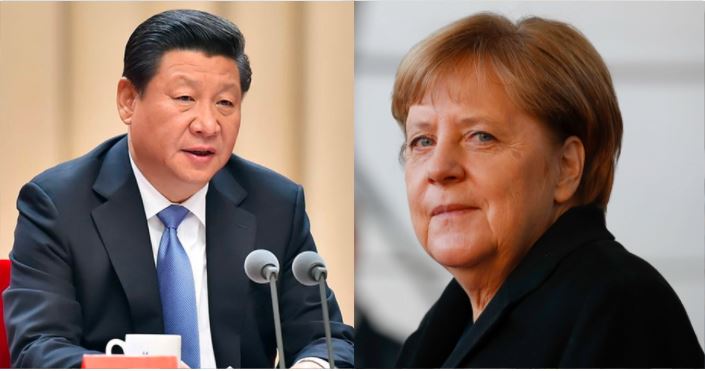 German Chancellor Angela Merkel is fast heading towards the end of her tenure. Once she steps down, China would have lost its protector and most powerful friend within the European Union. Meanwhile, a paranoid Chinese government is getting worried about the fate of the China-EU investment treaty which had got finalised in the first place due to Merkel’s intervention.

In fact, the entire Xi Jinping administration is rushing to somehow salvage the China-EU deal. While the Chinese President Xi Jinping tried to induce the European Parliament into ratifying the investment deal, Chinese Premier Li Keqiang targeted European business leaders and sought their support for the EU-China investment deal.

Therefore, Chinese President Xi Jinping is literally down to begging the EU for salvaging the investment treaty. In fact, Xi is getting unnerved by the European Union’s changing attitude towards Beijing. Last month, the EU approved sanctions on several Chinese officials involved in the ongoing Uyghurs genocide in Xinjiang. China itself had responded with retaliatory sanctions on 10 European politicians and scholars.

However, China actually ended up making a huge mistake. It imposed sanctions on five leading EU Parliament members whose votes are needed to ratify the investment treaty. The sanctions have angered European lawmakers. The EU Parliament, therefore, decided to cancel a meeting in which the EU-China investment deal was to be discussed. Prominent European lawmakers have even threatened not to ratify the investment treaty.

Yet, Beijing is trying to somehow get the deal ratified. Earlier this month, Xi held a video conference with German Chancellor Angela Merkel and French President Emmanuel Macron. The video meeting was said to be a preparatory session in the run-up to the Earth Day world leaders’ summit on climate issues. But Xi doesn’t care about climate, rather he showed more interest in European investment.

Xi urged the EU to ratify the EU–China Comprehensive Agreement on Investment (CAI), or the EU-China investment treaty. However, neither Macron nor Merkel responded to Xi’s desperate call for ratifying the CAI.

Within China, it must have been understood that with Merkel’s political career entering its last phase, the EU is exercising a lot more independence. Therefore, China doesn’t have any friend to bank upon in the Brussels-based intergovernmental bloc. As such, Beijing is looking upon all possible options to somehow get the CAI ratified.

Even the Chinese Premier recently met representatives of foreign businesses operating in China, with a special focus on European businesses. The meeting was attended by representatives from several countries including Germany, France, the Netherlands and Hungary. During the meeting, Li promised, “China will continue opening to the outside world, and the door will open wider and wider.”

Li added, “Companies from all countries are treated equally and fair competition is guaranteed.”

China’s strategy is easy to understand here. It is trying to foster closer ties with European business interests in the hope that business leaders would compel the European Parliament to ratify the EU-China investment deal. A palpable fear in Chinese strategic thinking is that once Merkel hangs her boots, Beijing will simply lose its influence in the EU and face serious pushback from Brussels.