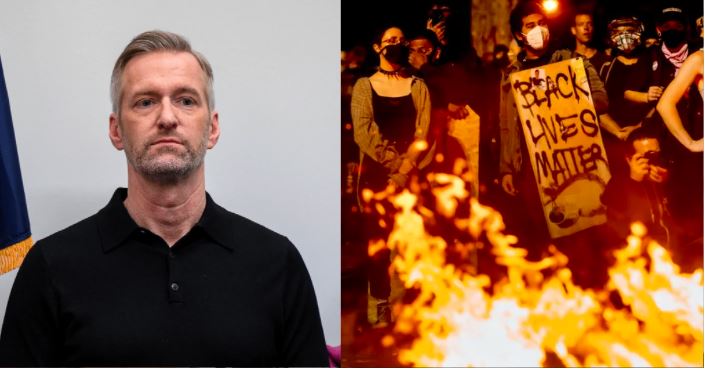 What goes around comes back around, and it is exactly what is happening with the Democrats when it comes to Black Lives Matter and Antifa. The Democrats were the ones who supported the violent style of protest by these groups and toed their line just to unseat Donald Trump, however, now as the Democrats are in power, the same groups have become Frankenstein’s monsters for the Democrats. Black Lives Matter and Antifa spoke out against Portland mayor Ted Wheeler’s call to ‘unmask’ violent protesters. Hours after the mayor’s comments, another riot broke out in the city.

The mayor of Portland, Oregon, has asked for the public’s help putting an end to the violent protests that have ravaged his city since the Black Lives Matter riots first erupted last spring. “They want to burn, they want bash, they want to intimidate, they want to assault,” Mayor Ted Wheeler said Friday while announcing the city would extend its state of emergency through Monday. “If BLM leaders can show the courage to stand up to this mob, then we all should,” said the mayor, singling out the “the self-described anarchist mob” responsible for “criminal intimidation and violence.” “Together we can make a stand … and take our city back.”

The city has been burning since the death of George Floyd and the BLM as well as Antifa protestors have found a way to push their agenda. Murders in Portland have more than tripled year on year, according to reports. Homicides have increased by 270.6 per cent between July 2020, when the city’s budget cuts were enacted, and February this year, the most recent data available, relative to the same period last year. According to police reports, there were 63 murder offences registered from July 2020 to February 2021, but only 17 from July 2019 to February 2020.

Read more: ‘Defund the Police’ campaign in the aftermath of Floyd’s death has led to countless murders in the USA

Following Friday’s riot, which was one of many this month, Black Lives Matter demonstrators and other “protesters and community leaders” marched on city hall to condemn the mayor’s call for action, according to KGW NBC8. Protesters said that the mayor misconstrued the terms they used earlier in the week when they drafted an open letter to protesters, according to a local NBC affiliate. Democrats would have thought that with the departure of Donald Trump all these activists and rioters will move away and go back to their normal self, but things have taken an entirely opposite turn.

These activists wrote an open letter to violent protesters, which said, in part, that “actions that neither increase solidarity nor broadcast purpose while making the lives of local Black communities more difficult are not acceptable.” However, all hell broke loose when the Democrat Mayor of Portland criticised the protestors who did not listen to the organisations and continued to spread riot throughout the city.

The fact that the protestors, activists and the BLM and Antifa members think that they have the prerogative to state what is looting, what is criminal and what is a peaceful protest notwithstanding the losses that the businesses suffer due to the violence goes against every tenant of rule of law. And while the Democrats have thought of themselves as smart enough to deal with these organisations, they are realising the harsh truth in the harshest possible way.

As millions die across the planet, Pfizer has raked in a profit of $8.7 billion

India’s NSA Ajit Doval had Joe Biden by his neck. The result is here for everyone to see